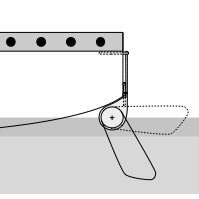 QUIDNON's rudders will be set up similarly to the centerboards (off-centerboards?)—one on each side—because the same reasoning applies. They will be similarly cambered out, to improve the effectiveness of the leeward rudder when heeled over. And they will be set up with rudder blades that kick up using a similar technique: a slug of lead embedded in the trailing edge of each blade will be sufficient to cause it to descend due to gravity and come to rest against a stop, but will not be so heavy as to preclude it from bouncing off the bottom in the shallows without sustaining damage.

The blades will not hang all the way down, but rest against a stop at a 30º angle from vertical. If they are allowed to hang all the way down, then the lead slug weighing them down becomes less effective, and they are bound to become deflected by the stream of water rushing past, resulting in erratic steering. On the other hand, if they doesn't hang down far enough, then the angular momentum they would build up from the stern of the boat moving up and down will be enough to cause them to bounce up, again resulting in erratic steering. The angle of 30º is a good compromise between these two extremes, and will be further tuned to produce neutral steering, so that the rudders trail in the water, and produce a small amount of feedback to the helm, but so that moving them takes minimal effort.

The vertical axis of each rudder will consist of a bronze pipe fixed within the rudder assembly. The top end of each pipe will pivot within two very substantial brackets bolted to the transom. The pipe will be designed to be sacrificial: if the rudder hits something underwater, it is this pipe that will be bent. Spare lengths of pipe will be carried on board, and it will be possible to replace it with the boat in the water.

Each rudder blade will be bolted to the rudder body using a ½-inch bronze bolt with large fender washers, and two disks made of polyoxymethylene (Delrin) sandwiched between the rudder body and the blade to provide friction-free action. The rudder body will be constructed of solid fiberglass (roving and mat covered by cloth) while the blade will be made of two pieces of ¾-inch plywood screwed and epoxied together and covered in 3 cloths of fiberglass. A puck of lead will be embedded in its lower trailing edge.

When running downwind in heavy weather, with the centerboards pulled up, it will be possible to toe in the two rudders to slow the boat down. Not only will they add drag, but, because the blades are cambered out, toeing them in will force the stern down, making pitchpoling or broaching less likely. A typical unpleasant situation involves a storm that makes heaving to difficult, with ample sea room, so that running downwind under bare poles is a good choice, but the boat is too fast even under bare poles. The usual procedure is to deploy a sea anchor or to trail warps off the stern. QUIDNON will offer another choice: apply the brakes by toeing in the rudders. Of course, this requires the rudders to be built very heavily.

When motoring, both of the rudders will be well out of the way of the stream of water from the prop. This, based on my experience, adds about a knot of speed given the same throttle setting when motoring at slightly below hull speed. I have never understood why designers place the prop directly in front of the rudder and incur a speed penalty when it is so easy to offset it slightly. Love of symmetry?
Posted by Dmitry Orlov at 12:00 AM