A Safe Space for Survivors

In spite of nature’s best efforts to derail my plans, in the form of Hurricane Matthew, they are proceeding apace, including the plan to design QUIDNON—the houseboat that sails. The hurricane provided a teachable moment on surviving hurricanes aboard boats, confirming many of my intuitions about what makes QUIDNON a safe design for any situation, hurricanes included.

We were in a mandatory evacuation zone, and although we could have sheltered in place, I decided to avoid subjecting my family to such an ordeal. And so we jumped in a rental car, drove away from the coast and sat out the hurricane in a motel room. When we got back, picking our way between piles of debris that were littering the roads, we found that the boat had suffered zero damage, but that the entire marina came within a foot or so of being annihilated: another foot of storm surge, and only some concrete pilings would have been left, with the rest of the marina, boats included, washed up on shore, with the boats crushed underneath the floating docks. In fact, this is what happened to many of the other marinas in the area. Since the height of the pilings was set a long time ago, when ocean levels weren’t rising as quickly and catastrophic storms were less frequent, this is going to be happening more and more frequently. Everyone here considers the fact that the marina survived something of a miracle. 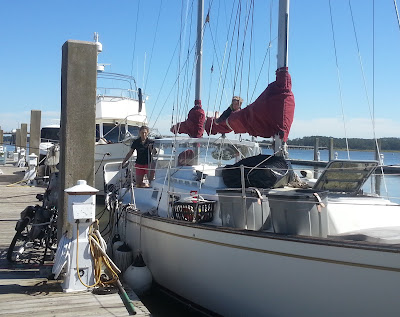 Boats at anchor did not fare too well either; most of them have ended up on shore when their anchors dragged or failed. Of these, the sailboats did the worst: the combination of a lead keel mounted to an eggshell-like fiberglass hull is a bad one when it comes to tackling land. Once the keel hits and the boat flops over, total damage becomes almost inevitable. The boats that did the best were mored to stationary anchors with chain: large concrete blocks embedded in the bottom. Well-designed boats don’t care too much about wind and water; it’s solid objects that kill them.

These observations validate some of the design decisions that went into designing QUIDNON:

1. The ability to get out of the marina in a hurry is very important. Most people who live aboard boats don’t put too much effort into making sure that the engine is in good running order. For an inboard diesel this is quite a lot of effort and expense. And so when the time comes to move the boat out of the marina and put it on a mooring, the engine may not even start, or start and then stall because the fuel is old and the fuel filter becomes clogged with sediment. But since QUIDNON is going to be powered by an outboard motor mounted in an inboard well, this will be less of a problem. First, the motor can be used to power a dinghy when QUIDNON is at rest; secondly, outboard motors are much easier to lay up, and usually fire up afterword with just a bit of effort. Gasoline does not grow bacteria like diesel fuel, and can be stabilized and stored over long periods of time.

2. No matter how hard you try, your boat may end up on dry land. Therefore, it is very important that QUIDNON goes aground well. Having a wide, flat bottom covered in roofing copper over tarred felt will make QUIDNON relatively shore-friendly: roofing copper is tough material, and will work-harden rather than rip. Once the extreme weather passes, it should be possible to drag QUIDNON back into the water over round sticks using the anchor winch.

3. A hurricane is not a convenient time to go sailing. Sailboats have masts, which generate windage during a hurricane, and are not useful unless you plan to go sailing. After a hurricane some number of masts can be seen poking out of the water at low tide: not only were these masts of no use during the sinking, but they now pose a hazard to navigation. QUIDNON’s masts can be taken down and lashed to the deck by a single person in an hour or so, reducing windage and weight up top.

4. Once the hurricane is over, weeks may pass before the local economy gets back to normal. Food, electricity and gasoline are likely to remain scarce for some time. In order to make it, is important to have lots of storage space stocked with food and water. QUIDNON’s ample lockers and massive water tanks (which double as ballast) can provide for months of autonomous survival.

5. The safest place for a boat during a hurricane is on shore. This is true even for keelboats, which are stored on jacks and can get pushed over in a hurricane. QUIDNON needs no special arrangements of this sort, and can simply sit on a patch of dirt, next to your house, stocked and ready to serve as hurricane shelter or, if the waters reach high enough, a floating escape capsule. Moored between two pilings in a flood zone, it will simply float up in case of a flood, then settle again.

6. Even if the motor runs, it may turn out to be impossible to move the boat out of harm’s way because its bottom and prop are fouled with marine growth. People who live aboard boats don’t usually find it necessary to haul them out and repaint the bottom with anti-fouling paint every where. And so they find that their boat won’t move when it has to, even with the engine at full throttle. QUIDNON’s bottom is surfaced with roofing copper designed to provide anti-fouling for the expected lifetime of the boat (around 30 years), will never need to be hauled out and repainted, and will always be ready to move.

7. There are cases where there is simply nowhere for a boat to shelter near land, and the safest survival strategy is to head for open water and away from any dirt or rocks. Remember, sticks and stones will kill a boat, but wind and water are its natural element. Here, it is very important that the boat have certain characteristics that allow it to survive any conditions, no matter how wild. Stability and the ability to self-right is very important, and QUIDNON's impressive 130º of primary stability will help it stay right-side-up no matter.

9. Although staying well away from dirt and rocks buys a large amount of safety, there is still the small chance of encountering floating debris that can hole a hull. Here, QUIDNON's self-rescuing characteristics are very helpful: blowing out the water tanks with compressed air, making them buoyant and blocking off the aft cabins to allow additional flotation, allows it to remain afloat with the cabin knee-deep in water until the hole is plugged and the water pumped out.

10. When disaster strikes and you happen to be possessed of a secure, well-stocked, self-sufficient survival capsule such as QUIDNON, you may find that you have more company than you expected. Most 36-foot sailboats usually can’t accommodate more than four or five people with any degree of comfort. In contrast, QUIDNON’s interior space is rather carefully carved up to provide the maximum of accommodation with a maximum of flexibility. There are two aft cabins that can sleep two adults each, four settees (two in the main salon, two in the bow cabin), two pilot berths in the main salon that provide beds for two adults each, or a larger number of children, and two generous shelves in the bow cabin that can provide cribs for babies. There is a full galley to cook for all of them, and a heads with a full-size shower stall and a mini-bathtub for the kids to wash them all.


* * *
This last point is the one that I would like to discuss here at some length, because we are nearing the end of the design process to maximize the interior space. The interior structure—the bulkheads, the sides and the top of the water tanks and the board trunks, the settees, the cabin soles and the various partitions—are all made of plywood pieces that are joined together in a variety of ways: jigsaw joints, box joints, and mortise and tenon joints. Each element serves two purposes: it maximizes the use of space, and it also maximizes structural rigidity: everything is structural.

Next project on the list is to analyze the structure using software, to identify stress concentrations and weak points, to select appropriate thicknesses of plywood for all the elements, and to add gussets and other reinforcements where necessary.


Because of the curve of the bottom the cabin soles are at five different levels. The lowest are in the galley and the heads, where people (including very tall people) are most likely to be standing for extended periods of time, with a full 6’10” (2 m) of headroom. The cabin sole in the companionway is a bit higher, because there is 3 tons of solid ballast under it.


The aft cabins are not designed for standing room, and are just 4’7” (140 cm) in height, but provide plenty of locker space below the cabin soles. They can be used as storage, as sleeping accommodations, and, with the bed rolled up and stowed and a drop-leaf table and a fold-out seat, serve as a workshop, a study or even a miniature classroom.

The main salon has 6’3” (190 cm) of headroom, which is enough for some 90% of the people to avoid having to stoop. The settees and the pilot berths, at 10’ (3 m) long, provide room for up to eight people to stretch out with their heads pointed in opposite directions (with some overlap between their legs).

Because every element is both functional and structural, we have made every effort to keep the layout as generic and multipurpose as possible while maximizing both living space and locker space. Completely missing are shelves, cabinets, hanging lockers, slide-out drawers and other typical cabinetry. There will be some built-in cabinetry in the galley and the heads, to be sure, but the overall approach is to provide a minimum of structure, which will be unalterable, and allow people to customize the rest as they see fit.
Posted by Dmitry Orlov at 11:40 AM 35 comments: