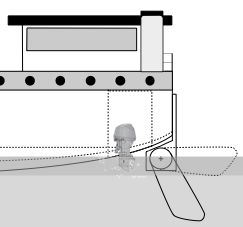 When I looked into replacing the inboard diesel on my current boat, I found out that it would cost about a third of the price of the entire boat, and much labor, to pull the old one and install a new one. Considering that this engine would get used a few days a year for a few hours at most—to pull in and out of marinas, to shoot an inlet, and maybe to motor down a canal or two—this level of expense is completely ridiculous and impossible to justify.

Add to that the space that an inboard diesel takes up, with its endless hoses and other mechanical junk. Add to that the stink of diesel, the periodic oil in the bilge when the beast decides to start leaking, the decommissioning/recommissioning boondoggle after and before each season, and the clatter and throb of a high-compression engine, and the inboard diesel's remaining charms seem rather few and far between, at least to me. The high price of replacement parts, or of diesel mechanics, doesn't charm me either. Nor am I pleased with the necessity of contorting myself in a cramped space full of filthy, jagged objects in order to work on it (sailboat engines are installed in some of the most uncomfortable, badly designed engine compartments on earth).

When a diesel engine isn't being used, its fuel accumulates condensation and grows slime, which then plugs up the fuel filter. You see, certain bacteria find diesel fuel delicious, and all it takes to get them started is a few drops of water at the bottom of the tank. Diesels are generally reliable, except when there are fuel problems, but that is almost all the time, meaning that they are not reliable at all. There is almost no other use for diesel fuel than to burn it in a diesel engine. Diesel causes kerosene lamps to burn their wicks in a big hurry, and kerosene heaters do work on diesel but stink up the cabin.

At this point some people would probably want to point out that diesel engines have certain advantages. They last an incredibly long time—tens of thousands of hours. You are just supposed to change the oil every 100 hours or so... which I never do, because I have never, ever racked up 100 hours on any engine I've owned, even when moving the boat between Massachusetts and Florida. Instead, I changed the oil once a year, whether it needed it or not. What a waste! Diesel engines are also more fuel-efficient than gasoline engines. But I don't care about fuel efficiency. I only care about overall efficiency, and in terms of overall efficiency (money, space, etc.) diesel engines are, for me, grossly inefficient. Lastly, some people will say that diesel fuel is safe because it isn't particularly flammable, as opposed to gasoline. This is true, but there are plenty of gasoline-powered boats in the world, and they hardly ever explode, which is good enough for me.

But what alternatives are there? Well, it is possible to do an electric conversion. Electric conversions are quiet and much more efficient, because they can generate constant thrust instead of constant revolutions. But once you decide that you need to be able to motor any great distance, you find out that something has to power the electric motor, and that something invariably turns out to be a diesel generator, returning you to square one. Well, not quite: the price of an electric motor, motor controller, batteries, charger and associated wiring and hardware, plus the price of a diesel generator, is two or three times what it costs to just to replace the old diesel with a new one.

Another alternative is to use an outboard engine. Outboards mounted on transom brackets can be seen on many smaller sailboats, but they don't work very well at all because of cavitation, where waves cause the prop to come out of the water. When that happens, the prop spins in the air, the engine screams, and the boat rapidly loses speed; it's a most unpleasant experience. There is no way to properly adjust an outboard bracket on a sailboat; either it sits too high and the cavitation is simply relentless, or it sits too low and gets drowned by waves.

To work well with an outboard engine, a sailboat has to be designed with a special aperture some distance forward from the transom: an engine well. Since there isn't room to tip the engine up when not in use, it has to slide up and down on a track. And since you don't want to be reaching down into a well every time you need to shift or adjust the throttle, it requires control cables going to a console.

But if all these things are designed correctly, this arrangement works remarkably well. If you need to work on the engine, you pull it out of its well using a hoist, put it on a work-stand and work on it comfortably standing up—no need to clamber around an inboard engine, stuffing yourself into tight spaces, skinning your knuckles and bruising your kneecaps.

Unlike a sailboat's diesel, many of which are exotic, with hard-to-find parts (Volvos are especially notorious) if the outboard engine ever fails, it can be replaced for short money anywhere in the world very quickly and easily. If you find that you need more power, the upgrade is an easy one, because, unlike diesels, outboards don't increase all that much in size as they increase in power. A 75hp is not all that much bigger than a 10hp. HOGFISH motored at about 6kt on a 10hp Yamaha. QUIDNON will probably need at least a 35hp to go as fast.

Gasoline left over at the end of a voyage or a sailing season can siphoned out and burned in dinghy engines and cars. Also, nothing eats gasoline, and if stabilized using some additives it keeps for a few years (in my experience at least).

My plan for QUIDNON is to build it with an engine well in the back of the pilot house. The engine bracket will slide up and down on rails that will be mounted on generous neoprene doughnuts to insulate the boat from engine vibration, and the engine well itself will be very well insulated against the high-pitched whine of an outboard engine. This, it turns out, is much easier than insulating against the clatter and throb of a diesel. I haven't worked out the horsepower requirements yet, but the range is between 35hp and 75hp.

If the engine needs to be lifted out to be worked on, a pad-eye on the roof of the pilot house directly above the engine well will accept a hoist. Once laid down in the pilot house, it can be carried out on deck by 2-3 people (a Yamaha F90 short-shaft, which I think would be overkill, weighs 366 lbs) and swung over the side onto the dock or into another boat using a hoist hanging from the end of the foremast boom.
Posted by Dmitry Orlov at 2:00 AM