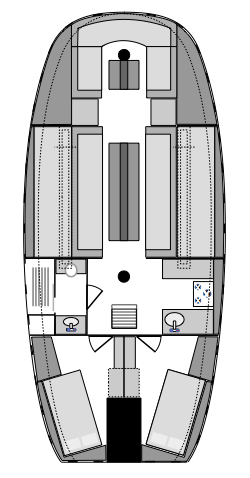 The cabin layout is designed to work with lots of people milling about. A representative scenario is as follows: a bunch of people have shown up and want to party; they have brought children who have to be put to bed at some point. Some people want mingle, others want to sit quietly in a corner and chat. Some people are hungry, and there is food being prepared. Some people don't mind at all that the boat has a sauna/steam room, and wish to avail themselves of it. Some people want to sleep; some other people want to have sex. There is a pole-dancer in the crowd.

Referring to the illustration, the black dot near its center is the mainmast, which can be used for pole-dancing. Directly aft of it is the companionway ladder which leads from the pilothouse and deck (where there is a completely separate keg party going on) down to the cabin. Directly aft of the companionway ladder are the two aft cabins. Between them is the engine well which is well insulated against sound; aft of the engine well, against the transom, is the propane locker holding two 20 lb tanks of propane used for the galley range, and the water heater when shore power is unavailable. Forward of the engine well and between the aft cabins and the rest of the interior are very substantial, soundproof partitions. This takes care of the people who want to sleep, and the other people who want to have sex at the same time; they won't hear each others' snores and moans, or the noise made by the revelers, nor will the revelers have to listen to them.

Directly to starboard of the companionway ladder is the galley, equipped with a sink, a three-burner propane range with a stove (most likely a Camp Chef) outfitted with a fume hood that exhausts outside (I am amazed that most boat designers neglect this key feature!) a refrigerator (most likely a Dometic 3-way) and some lockers and shelves.

Directly to port is the heads, equipped with a sink, a marine toilet and a shower/sauna. Aft of the shower/sauna compartment is a compartment that holds the water heater, the holding tank and various other bits of equipment.

Forward of the mainmast is the main salon. There are two settees, one on each side, with a drop-leaf table between them. This takes care of the people who want to sit down and eat. With one leaf of the drop-leaf table extended, they can sit on that side of it and eat, while people can still get past them on the other.

In the back of each settee is a pilot berth, which is quite generous. The pilot berths take care of the children who need to be put to bed at some point. There are curtains in front of the pilot berths, which are drawn to give them some privacy.

In the bow is a small sitting room, with room enough for 4-6 people. That takes care of the people who need a quiet corner to chat, work on a laptop or watch a movie.

That rounds out the experience. In all, QUIDNON can be used to host an impromptu gathering of 20-30 souls, and they won't particularly interfere with each other unless they all want to do the same thing at the same time (but this is unlikely). If the weather isn't bad, lots more people can hang out on deck, which is flat and can be set up with deck chairs and an awning.

Oh, and it bears mentioning that all of these activities are quite possible with the boat under way. There is just one spot that's reserved for sail handling, steering and navigation, and that's the helmsman's seat in the center of the pilothouse, directly behind the console. I will discuss it in a future post.

The dark grey areas along the sides are various kinds of storage: shelves, lockers, hanging lockers, cabinets and so on. The space under the pilot berths is occupied by the water tanks, but everywhere else the space under the settees and the berths is also used for storage. This adds up to about 500 cubic feet of storage space, most of it close to the waterline. If used to store water (not recommended) it would weigh 30,000 lbs. If used to store a library of books (slightly more reasonable) it would weigh 8,000 lbs. That is, by most standards, plenty of storage space, especially for a boat.
Posted by Dmitry Orlov at 12:00 AM