On most point of sail QUIDNON will sail just fine without using a centerboard. The chine runners will trap enough water along the almost vertical sides to prevent leeway. This was my experience with HOGFISH, which did a fine beam reach with the boards up, with barely 10º of heel. However, when sailing close-hauled, the chine runners become overwhelmed, and hard on the wind with the centerboard up HOGFISH could only manage a course about 60º to windward. This was still useful in tacking out of shallows, where the centerboard could not be deployed. But it wasn't possible to make good progress to windward out on the ocean without lowering the centerboard.

In addition, HOGFISH was impossible to dock or to maneuver in and out of a slip with the centerboard up. This was a mistake I made on multiple occasions, and at one point I even wanted to make a little brass plaque, to screw to the dodger right above the companionway; something along the lines of “Remember to lower the centerboard, you idiot!” With the centerboard up, the rudder would quite effectively alter the orientation of the boat, but not its direction of drift. Luckily, dropping the centerboard only required ripping a line out of a jam cleat and could be done in about 3 seconds, so the embarrassment was generally short-lived. With the board down HOGFISH happily pirouetted within its overall length.

And so QUIDNON has to have a centerboard—the same kind I had on HOGFISH, since that design worked so well. It was a kick-up centerboard: when it hit things underwater, it bounced up. It was ballasted with a slug of lead embedded between its layers of plywood, and the amount of lead was calibrated so that the centerboard was almost neutrally buoyant when immersed in salt water. It descended through gravity, was reasonably easy to haul back up using a 3-part purchase, and didn't get damaged when it hit something underwater even when moving at hull speed.

In addition to providing lateral resistance and good tracking, the centerboard also served as the depth sounder of last resort: by keeping the centerboard purchase under a bit of tension, I could get a warning of an impending grounding. When it started to droop and jingle, it was time for a quick 180º course correction. Working together with the kick-up rudder blade, the centerboard also made for very responsive steering when being dragged through mud or sand. Thus, even when I found myself in barely 4 feet of water and heading for 0, I did not lose hope, because I could still execute a 180º course correction and head for deeper water.

The design of the centerboard on HOGFISH had the following major shortcomings:

2. Having been made of 3 layers of ¾-inch plywood screwed and epoxied together and sheathed in fiberglass (3 layers of cloth) and suspended on a pivot made of 3-inch bronze pipe, the centerboard was relatively indestructible—except for its forward edge. Coral heads were especially hard on it, taking big chunks out of it, which I had to fill in with thickened epoxy during subsequent haul-outs. The obvious solution is to screw a stainless steel rub-rail to the leading edge of the board. The screws have to be long (3 inches) and bedded in epoxy, so that they don't pull out even if the rub-rail takes a big enough hit to crimp and drive it into the plywood. 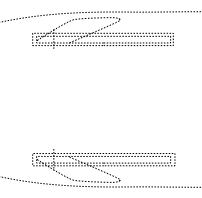 On QUIDNON the design of the centerboard poses an additional challenge: given its wide hull, a single centerboard hanging down from its center-line will be rather ineffective when the boat is heeled over, because only part of it will be submerged. My solution is to have two centerboards instead of one—one on each side of the hull. Note that this solves Problem 1 above: the centerboard trunk will no longer take up the prime real estate in the middle of the cabin. Instead, each centerboard trunk will sit off to the side, making a comfortable 2½-foot-high foundation for a pilot berth and forming one side of the fresh water tank (because everything must serve more than one purpose).

Problem 3 will be solved by providing an access hatch at the top of the centerboard trunk, with hoist attachment points screwed into the cabin-top above for lifting the centerboard out for service with the boat in the water. Since the bottom of the boat will be surfaced with copper sheet, it will never need to be hauled out, and so the ability to service the centerboards in this way will be essential. 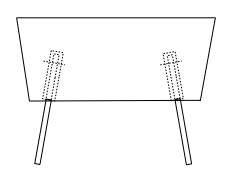 An additional problem remains: with the boat heeled over, the centerboards will not be at an optimal angle. The optimal angle is at 90º to the surface of the water, but if the boat is heeled at, say, 30º, then its effective surface area is reduced by some 15%. The solution is to camber the centerboards out by a small amount—10-12º.

Both centerboards will be lowered for maneuvering in tight quarters, but when sailing to windward on a given tack for any great length of time, only the leeward centerboard will need to be deployed. This will cut down on drag somewhat. Of course, this is not something one would want to do when short-tacking through a channel or out of a crowded harbor.

What remains is a very, very minor problem: the problem of “clunking.” On HOGFISH, when tacking, or when temporarily lying ahull with the centerboard down, it would clunk back and forth in its trunk. This wasn't dangerous, but some people found it unnerving. It also interfered with sound sleep while underway. I would like to solve this problem by providing packing along the pipe that serves as the centerboard pivot, restricting the motion of the top of the board, and by surfacing the board with a strip of HDPE plastic (cutting board material) on each side at the point where it contacts the aperture at the bottom of the centerboard trunk. This should reduce clunking to a sub-audible level.
Posted by Dmitry Orlov at 12:00 AM