Sails are big business, and you can spend as much money on a set of fancy carbon fiber sails alone as on an entire good-sized sailboat in reasonable condition. But you can get around all that by going with a Chinese Junk rig. It has numerous other advantages beyond relatively low cost.

For starters, it gives you the ability to raise, trim, lower and reduce sail all without having to ever set foot on deck. It doesn't require a winch, just lots of blocks and plenty of line.

Junk sails are quite easy to make because they can be cut perfectly flat and still work. However, there are some complaints about them. They don't pull to windward when there is hardly any wind. Also, they don't point quite as high as a sloop, and the tacking can be quite slow. But they are much better than any sloop off the wind. 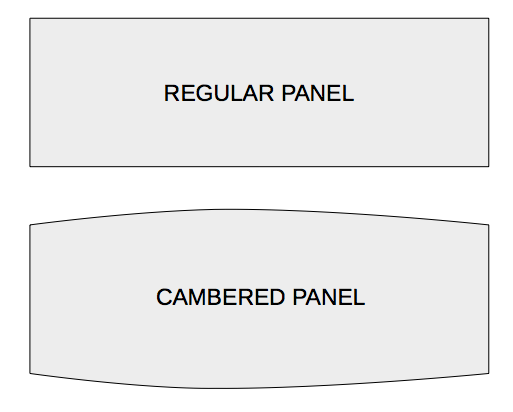 But it's not too hard to camber the panels, as Arne Kvernland recommends doing. Cambering the panels as shown gives them “belly” or “bagginess” so that it is the panel's shape rather than the flex of the battens that forms it into an airfoil that can take advantage of the Bernoulli effect to generate lift and move the boat to windward. A cambered Junk sail can be just as good to windward as a sloop rig.

I've gone through Arne's plans, and I am thinking of doing something just a little bit different. First, cambering the triangular top panels (the “storm sail” portion) seems unnecessary; they are shaped like Lateen sails anyway, which do work as airfoils even without any camber. Up there the wind is always a bit stronger, and I can rely on the flex of the battens to produce an airfoil.

Second, it seems like camber should be tunable, to be adjusted as the sails stretch and depending on the sort of sailing one tends to do. Third, I see no reason to add camber forward of the mast, since that will only be useful on the starboard tack, when the sail is pulling away from the mast, and will actually hurt windward performance on the port tack by rendering the sail forward of the sail useless. But I think Arne definitely has the right idea overall.

To make a sail, panels of fabric are stitched together along the selvage, then the whole ting is trimmed to size, reinforced and grommeted. The fabric doesn't have to be low-stretch, because the span of cloth between battens is rather small and no amount of it is under any great amount of tension. If made of ultraviolet-resistant Sunbrella fabric (which is used for dodgers, awnings and sail covers) Junk sails take a very long time to wear out. I would like to make the lower panels cambered, and to make the camber tunable. My plan is as follows. Add to the sail some small grommets— large enough to admit two thicknesses of parachute chord—above the boom and to each side of the lower battens, as shown. Then, to induce camber, the grommets are laced up like a boot. The lacing is adjusted to produce the optimum amount of camber. The grommets at the luff and the leech are larger and will be strain-relieved using strapping. They will be tied together with several turns of thicker line, to deal with the higher strain at those points. When there is no wind, they will carry half the tension between the halyard and the boom downhaul (or the reefing line when the sail is reefed). The other grommets are more like reefing points and won't generate much strain, being responsible for the pull generated by just a small portion of one panel.

As the sail wears and the panels become baggier, the lacing is loosened gradually, until, when the sail is good and threadbare (Junk sails continue work fine even with fairly large holes in them) the lacing can be taken out completely, and the bagginess will remain because the fabric has stretched. The idea is not entirely original: there is a grommet on dinghy sails called a cunningham. It is used to take the belly out of the sail in strong winds. Well, these grommets are, I suppose, “reverse cunninghams.”

Because they have to slide almost all the way up the mast, Junk sails preclude the use of spreaders. It is still possible to use a forestay and straight shrouds, but why not go unstayed instead? Tapered aluminum flagpoles make very good unstayed masts. Not having to include shrouds, stays and spreaders saves quite a lot of money and an amazing amount of deck clutter when the masts are down on the boom gallows and the boat is being used as a canal boat.

For battens, I am thinking of using square-section aluminum tubing on the starboard side of the sail which faces the mast, and aluminum bar of matching width on the port side. It will be assembled by drilling holes every few inches through the bar, the sail and one side of the tubing, and pop-riveting through them with aluminum pop-rivets. Where the batten rubs against the sail, it will be sheathed with a half-round of PVC pipe (made by sawing PVC pipe in half lengthwise). These battens will be quite stiff, and the sail will rely on the camber of the rectangular panels and the Lateen sail-like characteristics of the triangular top panels to produce lift.

The sail plan I have in mind is quite large for a 36-foot boat: 1000 sq. ft. This should make the boat nice and fast off the wind in light winds, which is just the sort of sailing I like to do.

The sail plan shown above is based on Hassler & MacLeod's adaptation of the Chinese Junk rig. They introduced some significant simplifications and improvements into the ancient design, which is quite an achievement. I hope that my reverse cunninghams will be another leap forward for this wise and ancient design.

The only other possibly new element I've introduced is the use of boom gallows for sheet blocks. It shortens the sheets by a large amount, and keeps the mass of line from invading the deck when tacking or jibing. On daysails, there may be people, children and small animals milling about the deck, and this arrangement will make it less likely that they will get entangled and pulled overboard.

That's the theory. Will it work in practice? Well, we'll just have to see. The fallback is to have one extra line, going from the front end of the boom straight back, whose one job to pull the sail back before releasing the aft topping lift to plop the whole assembly onto the boom gallows.

What do you think, will it work?
Posted by Dmitry Orlov at 2:00 AM