Sailboats, even relatively spacious boats the size of QUIDNON, are often somewhat lacking in creature comforts. Since they are partially submerged, the cabins are susceptible to becoming damp, and to growing mold. The relatively small airspace within the cabin allows smells to easily spread throughout. If somebody is cooking a stew, the entire boat smells like stew; if then eating it gives someone indigestion, the entire boat smells like indigestion. Many boats are equipped with Dorade vents, which, when pointed into the wind, direct some of it into the cabin. The amount of ventilation they produce is either too much or not enough. They also interfere with keeping the cabin warm because they allow the heat to escape.

In colder climates, condensation from breathing and cooking with propane (which makes water vapor) tends to condense on walls, and especially on portlights and hatches, and cause cold drips. Few things are less pleasant than trying to sleep under a hatch that periodically drips icy water on your head.

Sailboat cabins also tend to be rather dark. This is because it is very hard to provide enough hatches and portlights to properly illuminate the interior. Also, most older boats were built in an era where light fixtures were expensive and inefficient, and only provided little reading lamps here and there instead of lighting up the entire cabin.

Lastly, hatches and portlights often present a hazard. I am yet to see a commercially sold portlight that can't be easily smashed in by a big breaking wave, or a hatch that can't be stove in by a flailing broken spar. They are usually held closed by two little plastic tabs that break off quite easily. There are some old bronze portlights that are secured using a substantial toggle, but these are expensive.

Add to this the fact that the various commercially available bits and pieces—portlights, hatches, Dorade vents and so on—cost real money, which is nowhere to be found in QUIDNON's tight budget. Therefore, the approach I plan to take is quite different.


The cost-effective approach to lighting up the cabin is to have lots and lots of deadlights. Right below the gunwale will be a fat strip of plywood, made up of 3 ¾-inch thicknesses of plywood screwed together. It has to be thick because it is structural. Into this thickness of plywood are milled round holes, each only about 8 inches in diameter, but since there are 32 of them evenly distributed all around, that adds up to 11 square feet. On the outside, the entire strip is covered over with ¼-inch Lexan, which is caulked and screwed to the plywood. This combination is quite indestructible, and very cheap to make.

When it's dark outside, the cabin will be lit up using strips of LED lights mounted above and below the row of deadlights all around the cabin. This will produce a nice, even glow throughout. There will also be reading and cooking LED lamps installed in various places. The efficiency and low cost and reliability of LED lights is such that it is very hard to burn too much electricity, or money, by installing lots of them.

Since the cabin is quite wide, the deadlights and the LED strips will not be effective in illuminating the center of the cabin. For this, a large hatch will be built into the deck, right in front of the mainmast. It will be constructed as an upside-down box measuring 6 ½ by 2 ½ feet and about a foot high. This box will be secured upside-down over a foot-high plywood dam that will surround the opening in the deck. Two foam rubber gaskets, one around the inner edge of the box, the other around the outside of the dam, will prevent ingress of water even when waves run across the deck. The hatch will be double-glazed with one ½-inch Lexan reinforced with some ribs made of aluminum channel, and another, much thinner layer of Lexan below an air gap, to prevent condensation.

To provide ventilation, the hatch will be propped partially open in some direction, so as to serve as a wind scoop. While at sea, the hatch will be secured using wing nuts and toggles made of threaded rod. The hatch will also be used to load and unload provisions and cargo and to move major pieces of equipment (range, stove, water heater, refrigerator, etc.) 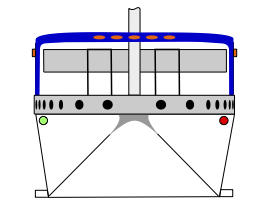 In keeping with the strategy of making each element perform as many functions as possible in order to minimize cost, the boom gallows will be hollow, constructed out of plywood box sections, in order to perform all of the following:

1. Prop up the back end of the foresail when it is lowered and secured.

2. Serve as an air collector, using the force of the wind (from whichever direction) to send air down below.

3. House exhaust plenums for the stove flue, the fume hood in the galley, and the so-called “stink pipe” from the holding tank. 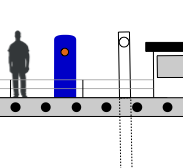 4. Provide a mounting point for a radome (since there is no other place to mount one) and also house an AIS receiver, a WIFI repeater and whatever other electronics that need to be installed above deck.

5. Provide a mounting point for the foresail sheet blocks.

6. Incorporate hooks for hanging a hammock directly under it.

7. In the middle of the underside, incorporate a hook for attaching a hoist for lifting objects in and out through the deck hatch.

8. Provide attachment points for a tarp that provides a roof over most of the deck.

Most sailboats are downright unpleasant to live on during the winter. Not only are they cramped to the point of causing cabin fever, but they tend to be poorly insulated, and therefore very expensive to heat. Not only that, but heating the air inside the cabin fails to produce a comfortable environment because the surrounding hull, which is in direct contact with the cold water and the cold air, remains cold. Some boats cabins are penetrated by a keel-stepped aluminum mast, which serves as a large heat sink, absorbing warmth and conducting it to the outside, because the builders failed to insulate it.

Directly insulating the sides is effective, but causes a secondary problem. Condensation does have to form somewhere, and if insulation is applied directly to the inside of the hull, then condensation will form between the hull and the insulation (it is quite impossible to make it airtight) become trapped there and cause mildew.

On QUIDNON, I plan to address these problems as follows. The inside of the hull will not be insulated at all. Instead, there will be an air gap between the hull and the walls of the cabin, which will be made of an additional layer of plywood mounted over fir ribs. It is the outside of the inner walls that will be insulated with ¾-inch pink foam insulation and radiant barrier. The function of the air gap will be to thermally isolate the cabin from the hull, and to allow condensation to form freely on the hull, drain to the bilge, and be pumped overboard by the bilge pump. Condensation is actually important, because it eliminates moisture from the air. To this end, the 32 deadlights all around the cabin will not be double-glazed. Instead, each one will be provided with a small recess at its bottom, where condensation will be allowed to pool, and a trickle path down to the bilge. (I got this bright idea from Sven Yrvind.)

A secondary function of the air gap between the hull and the cabin will be to provide passive solar heating and cooling. The topsides will be painted black, to absorb as much solar radiation as possible, and pass it through the fiberglass and the plywood to the air gap, warming the air. Warm air rises, creating a flow. Baffles and ducts will direct this warm airflow for either heating or cooling. To heat, the air flow will be directed into the cabin while fresh air will be supplied from the vents in the boom gallows. To cool, the air flow will be directed out through the exhaust plenums built into the boom gallows, pulling cool air into the cabin from the relatively cooler bilge or from the engine well where it's always dark and, when the engine isn't running, relatively cool.

The underside of the deck will be insulated directly, with ¾-inch pink foam, radiant barrier top and bottom, and a soft liner (for the hard heads of some extra-tall people). The reason for the two layers of radiant barrier is this: the outer, top layer will reflect heat from the sun, whereas the inner, bottom layer will reflect heat back into the cabin. Here, there is no room for an air gap, no way to arrange for drainage of condensation, plus, if the boat is heated at all, then warm air tends to accumulate right under the deck, making it warmer than the dew point. Here, the approach will be to create an airtight seal between the insulation and the underside of the deck, with expanding foam sprayed into all the gaps. Although in general terms like “airtight” and “watertight” never entirely apply to boats, in this case this strategy seems to work: this is what I did on HOGFISH, and, unlike the sides, the cabintop never had any issues with mold.

Below deck, the mast tabernacles will be insulated with a layer of radiant barrier and a layer of fabric to prevent them from acting like heat sinks.

The choices for keeping a boat warm are limited to diesel (not a good choice for QUIDNON, which will not use diesel), propane (a good, cost-effective choice) and, when the boat has access to shore power, electric space heaters (convenient but very expensive and not particularly safe). Another choice, which some marinas unfortunately forbid, is solid fuel (wood and charcoal). Solid fuel is the least expensive option, and in some ways the most pleasant, because the heat it produces is very dry.

QUIDNON will have a solid fuel stove installed in the shower/sauna compartment, with propane as back-up wherever solid fuel happens to be outlawed. A circulator fan will be used to move the hot air from the shower compartment to the rest of the boat, or to exhaust it to the outside (while someone is showering), or to leave it in place (for using the compartment as a sauna/steam room). To accommodate all these uses, the shower stall will be constructed with a moisture barrier and paneled with pine boards.

An 11-gallon water heater is a good choice for when shore power is available, but how does one shower when living at anchor or while under way? A good, cheap choice turns out to be a propane-fired tankless water heater. These are designed to be used for camp showers outdoors, but they can be used indoors provided they are installed with safety in mind and provided the exhaust they produce is vented outside. I believe there will be enough room in the heads to install one of these as well.
Posted by Dmitry Orlov at 12:00 AM