Small boat voyaging for the accident-prone 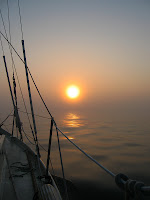 [On weekends this blog takes a break from designing QUIDNON. Here is a recycled article of mine from some time ago.]

The world is full of stories of success, mostly because successful people like to tell of their victories rather than expound on their defeats. This is self-serving of them and a loss to the rest of us, because we only learn from mistakes. The best kind are small, non-fatal mistakes; these are also the most common. Disastrous, fatal errors are rarely the first ones to be made, because it usually takes a compounding of errors to give rise to a fatal situation. And so here is a little object study of a series of small errors, the problems they caused, and the solutions they necessitated.

Giving credit where credit is due, let me say right at the outset that the problems I will examine here are not entirely of my own making: they were rather carefully set up for me by the person from whom we bought our boat. I do fault myself for my (initial) inexperience, my misplaced trust (I trusted that he knew what he was doing) and my inability to draw a conclusion and act on it (that the person in question was a dangerous incompetent and that everything on the boat that he had touched should be carefully examined, and, in some cases, cast overboard forthwith and replaced).
I have a plethora of examples to choose from, but, for the sake of keeping the story short and focused, I will zero in on just one problem: autohelm mounting. Autopilots (and other self-steering devices such as windvanes) are essential for people who make ocean passages single-handed or without much crew. My crew is my wife; if we were to steer by hand, we'd each have to steer for 12 hours out of every 24 (which we've done on occasion and did not enjoy). Needless to say, our tillerpilot is a favorite piece of equipment: with it, life is easy; without it, life is hard.
Our boat uses a Simrad Autohelm TP32, which is an amazing piece of equipment. Along with the GPS and the VHF radio, these are the only pieces of marine electronics on our boat, and are carefully chosen for being cheap, reliable, and indispensable. The boat came with a TP22 (TP32's smaller cousin) pre-installed by the boat's previous owner, which is where this story begins.
Tillerpilots are complicated on the inside (incorporating a fluxgate compass, a servo motor and a microcontroller) but simple on the outside. Clip them to a socket mounted in the cockpit and a pin mounted on the tiller, push the “Auto” button, and the boat will go in a straight line, for days. There are just three steps to the installation: mount the socket, mount the pin, and hook it up to 12 Volts. Now, what happens when one buys a boat where someone has screwed up all three? Answer: amazing adventure beyond your wildest dreams!
* * *
Having launched Hogfish, our boat, in Boston, our first voyage was north to Maine. The passage to Portland was uneventful. The wind was steady and the autohelm performed admirably. On July 27, 2007 we left Portland around 13:30 and headed across Casco Bay and up the coast. Around 17:30 the wind picked up considerably and I took in a reef. Around 18:00 I made a note in the log:
“18:00: Autohelm busted. Bracket farigued. No more autohelm.”
The broken bracket was a puny aluminum alloy stamping. It broke in half as I watched in dismay.
“18:16: Worked out a beam reach with tiller lashed.”
In the intervening 15 minutes, I put away the now useless tillerpilot and worked out a combination of sail trim and rudder angle to keep the boat sailing along without being actively steered. Now, Hogfish is a very good little boat that does something only some particularly well-designed boats do: it self-steers. That is, on most points of sail (anything from beam reach to close on the wind) it does not have to be steered at all to follow a course. It hunts around a bit, and sometimes a big wave or a big gust will knock it off course, but mostly it takes care of itself.
By 23:15 it was blowing half a gale in the direction of some jagged rocks, which I knew to be lurking ominously on the horizon. I logged: “At this point, need to avoid land... New course 124°M to avoid Manana Island.” I pointed the boat at the open ocean and played with the tiller lashings and sail trim to keep it on course. By midnight I was mostly napping in the cockpit. Every 7 minutes a periodic big wave would wake me up, and I would scan the dark horizon and adjust sail trim and tiller. By 3:21, based on dead reckoning, we were close-reaching safely south of Monhegan Island. Around 5:00 the wind died. I fired up the GPS and took a reading: 43°43.97'/69°09.35' which put us ESE of Monhegan and nowhere near any dirt or rocks. 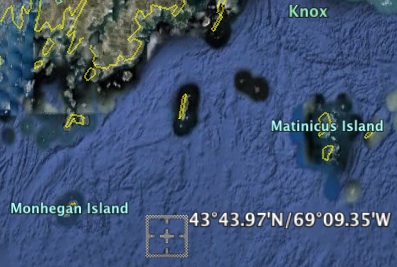 I measured the drift: 1 kt to 50°M—a reasonable direction back toward mainland with sea room on all sides. Since the wind was dead, “heaving to” was not an option. The remaining option was “lying ahull,” so I took down the sails, turned on the anchor light, let the sea do what it will and and went to sleep for real. I had to sleep on the settee in the cabin, stiff-arming the centerboard trunk to avoid rollng off, because my wife and the cat took up all of the V-berth, spread out as far as possible, to avoid getting rolled over by the big 7-minute waves. The cat seemed particularly well-anchored to the bedspread, with her paws outstretched and her claws out.
By dawn we had only drifted a few miles. It was windless and foggy. We motored to the tiny and picturesque Isle Au Haut and by 16:00 were at a “rented” mooring (the rent being a $20 stuffed into a Coke bottle attached to the mooring buoy) in the island's snug and picture-perfect anchorage. 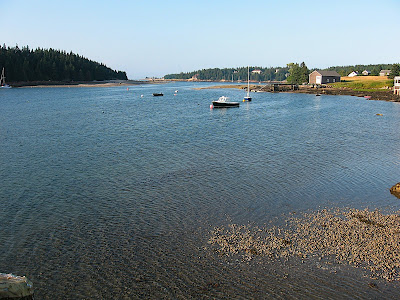 The next day I built a new bracket out of scrap using hand tools on board, and on the 29th we sailed on, to Blue Hill Bay.
* * *
This repair stood us in good stead for quite a while, until the fateful morning of October 27, 2007, when the pin rocked loose while we were sailing down Long Island Sound at night, toward New York City. I hand-steered the rest of the way, a good 6 hours of hard work avoiding getting spun around by big following seas that congregated at the narrow end of the Sound. While at 79th Street Marina I was able to fix the problem by stacking up some washers (which are rusted in the photo above because the hardware store on Broadway did not stock stainless steel hardware). But after that the pin, at least, held through all kinds of weather.
* * *
All was well with our autohelm hardware until July 10th of 2008, when we were approaching Beaufort, North Carolina, having cast off at St. Augustine, Florida on the 6th. Approaching Cape Hatteras (an evil spot from a sailing point of view if there ever was one) we were caught up in one of the outer arms of Hurricane Bertha, which whipped up gale force winds and 10-12 foot seas. In these conditions, the socket in the autohelm base worked loose and started rocking. I took all of this in and made a change of plan: we were going to make it to Beaufort Inlet running under bare poles and then get a tow through the inlet. This plan worked well enough, except for one thing: after the tow boat captain passed me the towing line and I tied it to the Samson post in the bow of the boat, a huge breaking wave swept through and tumbled the towing line under the boat, looping it around the rudder, so that when the tow boat captain throttled up, he put enough force on the rudder to snap our autopilot in half. Since he was a BoatUS captain, and I carried BoatUS insurance, BoatUS paid for a replacement autopilot, giving me a chance to upgrade to a TP32 from a TP22, so all was well. (While installing the TP32, I couldn't help but notice that the TP22 was wired up with the dinkiest of wires rather than the recommended 12-gauge, and this explained its sometimes erratic performance.)
As an aside, sailing in a hurricane is probably not everyone's cup of tea. Frankly, I don't care for it very much myself. It is unsettling to look up at your mast and see water directly behind it, and it is strange to look at the horizon and see an ant's eye view of a broccoli patch. Also, I don't much like it when the wind is strong enough to pick up a neat coil of heavy dock line right off the deck and string it out into the sea, or when, while clambering around the deck in a harness, I have to pinch my nose shut and breathe through pursed lips because otherwise the wind is strong enough to explode my lungs. At some point we declared the cabin unsafe because of all the loose cutlery flying around down there and boarded it off, and my wife sat in the cockpit with me, holding the cat wrapped in a towel. We were all relatively calm and self-assured, but after it was all over and we were safely tied up at Beaufort Docks, the cat gave me the weirdest look I ever got from a cat; a look that said something like “What in the wild world of sports was all that about?” Enough said; sailing through a hurricane is not a recommended procedure as far as I am concerned.
While at Beaufort Docks I drilled a new hole for the autohelm socket and epoxied it it in place.
In the process, I discovered two things: first, the original socket position was misaligned, causing the autohelm to “hunt around” to compensate for being rotated left while trying to turn right and vice versa, indicating that whosoever installed it was geometrically challenged. Secondly, what looked like a solid piece of wood used to mount the socket turned out to be masonite, which is an environmentally friendly product invented by one Mr. Mason and made by pressing together wood chips without any sort of glue. (The autohelm manufacturer's instructions specified hardwood.) I compensated for the weakness of this material by oversizing the hole and slathering it with epoxy. It held for as long as it had to.
While hauled out for repairs in East Boston during the winter of 2009-2010 I finally had a chance to address the problem of autohelm mounting once and for all. The base now consists of two pieces of oak lag-bolted and glued together, mounted to the cockpit seat using through-bolts.
The pin is now pounded into a carved piece of oak that is secured to the tiller by a U-bolt bolted through the rudder to a backing plate.
All of the above are coated with epoxy and painted with two-part polyurethane primer, and a couple of coats of two-part polyurethane paint. I suspect that this combination will outlast many things, including me and the boat.
Posted by Dmitry Orlov at 12:00 AM