About the most cost-effective and quick way of making a mast is to use a tapered aluminum flagpole. That is what I had on HOGFISH, and it worked just fine. There the mainmast was stepped in a tabernacle, and had 4 lower shrouds (fore and aft), 2 uppers (aft only) with no spreaders, a genoa stay which went to the end of the bowsprit and a staysl stay. Taking down the mainmast, and putting it back up, was always a bit of an adventure. Getting the mast up or down was pretty much the easy part; it was rigging and unrigging the gin pole, and detaching, coiling, reattaching and tuning the standing rigging that took all the time. Plus all that coiled wire rope cluttered up the deck when the mast was down.

On QUIDNON, I intend to go with unstayed masts. The arrangement I have thought up is as follows. The tabernacle of each mast consists of a galvanized steel pipe with a bracket made of steel plate welded to the top of it. The bottom of the pipe rests in a cup cast into to the concrete bottom, in which it turns freely if you twist it hard enough. The cup has a drainage path into the bilge, to shed any water that finds itself into the pipe. After fabrication, the tabernacles are slag-blasted and hot-dip galvanized. 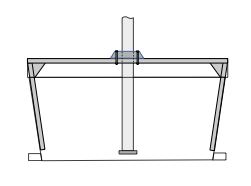 At the deck, the pipe goes through a precise, snug-fitting hole in a very substantial hardwood block (unvarnished teak) which is bolted through the deck and also tied into a frame made up of deck beams, knees and ribs. The pipe has a ring welded to it that rests flush against the bottom of the hardwood block, preventing the masts from falling out in case of a capsize. The ring is cupped, and there is a couple of small holes drilled through the pipe level with the upper surface of the ring, so that any water that finds its way there does not drip into the cabin but goes inside the pipe and eventually finds its way into the bilge.

The top end of the pipe has a three-sided bracket welded to it made of steel plate. The top of the bracket forms a slot which accepts the heel of the mast, allowing it to pivot. 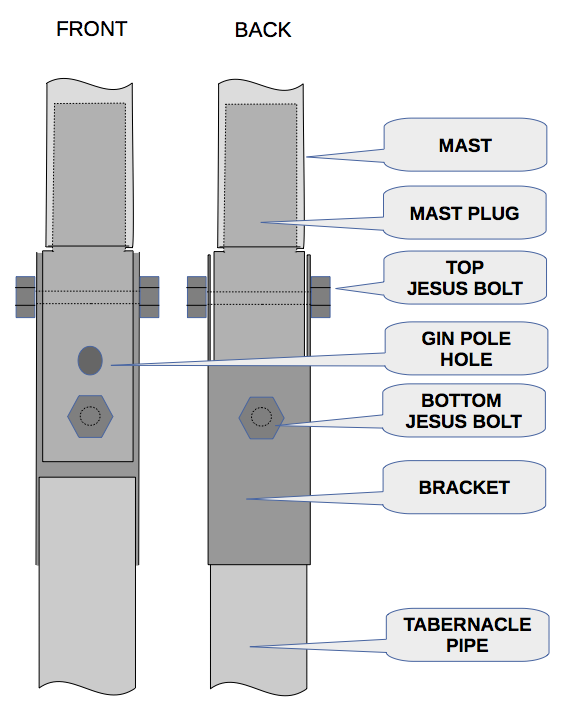 The bottom end of the mast is fitted with a plug milled and lathed out of a block of aluminum. The part of the plug that fits inside the mast is lathed to the correct diameter and taper for a very precise fit. The mast and the plug are mated for life by driving the plug into the mast with a sledge. There is a mechanical screw holding the two together, but it's mostly there to stop people from asking questions.

The bottom of the plug (the heel) is square in cross-section, and precisely fits the slot in the bracket with which it mates with just enough room for two large fiberglass washers inserted where galvanized steel and aluminum meet whose job is to prevent them from galling together. It has holes drilled into it for two bolts. These two bolts can properly be called "Jesus bolts," because, as with the "Jesus nut" that holds helicopter rotors together, the failure of either one of them would tend to interrupt one's voyage in a serious way. These will be one-inch diameter stainless steel bolts, and keeping them tight, clean and oiled is a key bit preventive maintenance. The mast heel also has a hole drilled partway into it at a 45º angle that accepts a gin pole, which is a 1-inch diameter solid aluminum rod that has a sheave on one end. There is a short pendant threaded through the sheave. The pendant has a thimble on one end and a snap shackle on the other. Lastly, there are two rings welded to the tabernacle pipe, one right below the mast, and another right above the deck. The boat will carry two gin poles, for a reason that will become clear in a moment.

The masts are erected in 12 easy steps:

1. The mast is maneuvered so that the square end of its plug sits in the slot in the tabernacle.
2. The top "Jesus bolt" is inserted and assembled with washer and nut, but not tightened.
3. The bottom "Jesus bolt" is dropped into its hole in the plug from the front but the nut is left off.
4. The gin pole is inserted into the plug, and the 4-part halyard block is attached to thimbled end of the gin pole pendant.
5. The end of the halyard is sent through a snatch block hooked onto the ring on the tabernacle right below the mast, then all the way back to the anchor winch in the pilot house.
6. The snap shackle at the other end of the gin pole pendant is attached to the ring on the tabernacle pipe right above the deck.
7. The halyard is hauled in using the anchor winch until the mast flops forward in its bracket, then cleated off. (QUIDNON's masts have forward rake.)
8. Washer and nut are threaded onto the second, lower "Jesus bolt" at this point, so that the mast doesn't come crashing down if a big wave hits once the halyard is released.
9. The halyard is released and detached from the gin pole pendant.
10. The gin pole is pulled out of the plug.
11. The "Jesus bolts" are tightened using two large box-end wrenches.
12. The happy single-hander, who has just single-handedly raised a mast without any fuss at all, does a little victory dance.

The procedure for lowering the masts is basically the reverse of the procedure for raising them, with just one additional step: once the halyard is attached and tensioned and the nut from the bottom "Jesus bolt" is removed, the tip of the mast has to be pulled aft using one of the topping lifts. Then the halyard can be paid out slowly, and the mast will come down.

Once both masts are down, the two gin poles are inserted in the holes through which the top "Jesus bolts" go. The masts rest on the gin poles, along with the sails, and are lashed down to them in a single tidy bundle. (You didn't expect the gin poles to serve just one function, now, did you?) The masts do not overhang either the bow or the stern of the boat, and do not incur any penalties in the form of increased slip fees (which are based on LOA—length overall) when QUIDNON is being used as a canal boat, with the masts down.

A mast wiring bundle comes out of a hole in each mast right above the plug, threaded through a length of hose. The hose screws onto male hose fittings on the mast and on the tabernacle. From there, the wiring runs down through the tabernacle pipe, out its bottom, and through a wiring chase cast into the bottom, then up through conduits that lead to the switch panel and the instrument panel. For lightning protection, the mast is electrically bonded to the tabernacle, and the tabernacle to the copper cladding on the bottom of the boat.

In calm conditions this operation can be managed by one person, but if there is a big sea running some extra hands may be needed to keep the mast from twisting around as it's going up. This can be done by running the topping lifts to the stern and keeping some tension on them. The other option is to simply let it twist as it likes, because once it's up it can be rotated to the desired orientation by putting one's heel against the gin pole. It's a good idea to put up the foremast before the mainmast, to eliminate the chance of the foremast banging into the mainmast and denting it as it comes up. For the same reason, when taking the masts down, the mainmast should come down first.

I would think that with this system a well-trained crew could drop sails and the masts in about 15-20 minutes, start to finish, and to put them up and get ready to sail in the same amount of time.
Posted by Dmitry Orlov at 12:00 AM