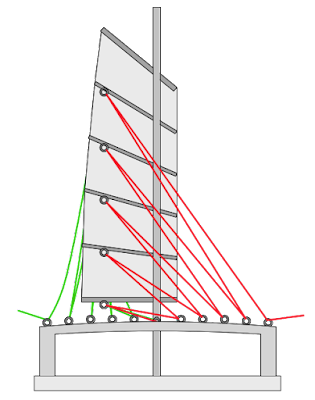 One of the problems with Junk rigs is that they tend to twist: the upper panels end up sheeted in less tight than the lower ones. Since the direction of the wind is generally the same at every height (while its strength varies) what this means is that only part of the sail is able to perform at optimum efficiency; either the lower panels are pinching or the upper panels are luffing, or both. 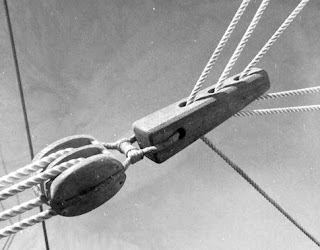 One classical way to deal with this problem is by using a euphroe. It is a piece of wood with holes in it to send sheetlets through, and it allows one to distribute the sheet tension across the battens in such a way that the upper battens are sheeted in with more force than the lower battens, counteracting the twist. Sailboat designer Tom Colvin, who circumnavigated with a Junk rig, favored the euphroe. Other people are less in favor of it, because it tends to flail about and hit things when tacking or jybing. I don’t particularly like the euphroe and would prefer something simpler to set up.

Previously, I proposed a design for an automatic traveler system that would move sheet blocks back and forth to counteract the twist. I don’t know whether it would work, because I haven’t tested it, mainly because I don’t like it. It’s too complicated. But I didn’t know what else to do… until yesterday.

Yesterday I looked at some traditional Chinese Junk set-ups, which use twin sheets. There are two separate sheeting set-ups for port and starboard tacks. Having two sets of sheets solves a couple of problems. One is that there doesn’t have to be a gap between the leach of one sail and the luff of the next for the sheets to move through, and a sail can overhang the transom without requiring a boomkin for sheeting, because each sheet hangs to the side of the sail. The other is that with the Junk rig the force on the sail acts differently depending on the tack: on one tack, it pushes the battens against the mast; on the other, it pulls them away from the mast. Because of this, the optimal sheeting angles are different for each tack, but with a single sheet there is just one attachment point on deck.

Now, that alone isn’t too interesting, but it becomes very interesting when combined with QUIDNON’s super-wide deck arches. You see, the twist happens because the forces on the different sail panels are different but the sheetlets all go to blocks that are all the same spot, at the same angle to the sail. But the deck arches allow the sheet blocks to be spaced apart so as to counteract the twist. 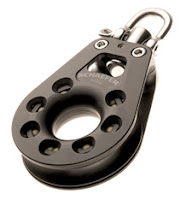 And so that’s the solution I finally arrived at. The sails are set up with blocks that hang from the boom and from each of the four battens. Since the higher battens need more sheeting force, because of higher wind speeds up top, the attachment points of the blocks move progressively further aft the higher up on the sail they are, with the topmost one almost all the way to the leach of the sail. The deck arches are set up with a padeye right in the center, and then two sets of blocks on two separate tracks to port and to starboard, for each of the sheets. The sheetlets start up at the padeye, go up to the block on the boom, then down to the innermost block on the track, then up to the lowest batten, then down to the next block on the track and so on.

The track allows the blocks to move, allowing the setup to be fine-tuned depending on conditions. For example, on the relatively flat and windless Chesapeake, where the most you might get is a few feet of chop, the lower part of the sail gets not much less wind than the upper part, and tends to twist less. On the other hand, out on the Pacific the swell can run at 20 feet or so, blanketing the lower part of the sail a considerable portion of the time, twisting the sail much more. To make an adjustment, one reaches up to the deck arch, unscrews the knob that holds the block in place, and slides the block over a bit. A bit of trial and error will give you a sail that can be sheeted in perfectly flat in the prevailing conditions.

I like this solution because of its simplicity. The trade-off is that the running rigging has gained two more lines, because now there are four sheets to manage instead of two. But then that’s not a big increase in percentage terms. Before splitting up the sheets into port and starboard there was the one sheet, two halyards (peak and throat), two topping lifts (fore and aft) and one downhaul. That’s 7 lines per sail. And now there are 8.

The twin sheets have a few additional advantages. They make it possible to backwind the sails, to slow down or even to sail backwards. This is sometimes useful; for example, for sailing into a slip at a marina. (Yes, Junk rigs make it possible to do things under sail that sloop and ketch sailors can only dream of.) It also makes it possible to heave-to in the traditional manner, by sheeting in the main, backwinding the foresail and lashing the tiller to leeward, rather than in the Junk manner—by simply letting go the sheets and playing with the rudder until the sails trail off to leeward at some comfortable angle. When becalmed in a swell they make it possible to tighten both port and starboard sheets so that the sails do not swing back and forth on the swell, snubbing at the sheets. Lastly, if a sheet parts (as they all do eventually) then it is still possible to sail—perfectly well on one tack, less well on the other.

There is just one question left to answer: Does this actually work? (I know, details, details...) Well, I rigged it up on the 1:12 model, and, lo and behold, it does! Here's the money shot: the mainsail sheeted in sets perfectly flat. This is about as good as it gets. This boat is going to sail to windward and short-tack like a dream!

Update 2016-12-16: In discussing this sheeting arrangement with Dave Zeiger (who generally approved of it) it turned out that there is one more problem to solve: when the sail is reefed, more force from the sheet gets concentrated on the boom and the battens that stack up at the bottom of the sail, causing a lot of twist. My proposed solution (to be tested) is to add a row of cam cleats to the front side of the deck arches. The drill is, prior to reefing, walk up to each deck arch, take the appropriate part of the sheet and jam it into a cam cleat, so that the rest of the sheet remains slack and imparts no force on the boom or the other battens stacked at the bottom.