Room for a Pony

When I first setting out to buy my current boat (forced to do so because my family got larger and no longer fit aboard) I discussed the various offerings available in the commercially-built sailboat world with my friend Capt. Ray Jason. He asked me what I was looking for in a sailboat, and among other things I listed “a sauna, and room for a pony.” (I didn’t mention that I also want to be able to ride a bicycle around the deck, or hang a hammock on deck while the boat was under way, but I do.) And then the pony became a running joke between us. When I complained that, for instance, it was hard to plot a reasonable, traffic-free coastwise course that would allow me to sleep because there were always radar contacts bleeping away at me, Ray would helpfully suggest that I ask the pony to keep watch while I sleep. And so on.

But now I am happy to report that we have finally succeeded in designing a sailboat with “a sauna, and room for a pony”—and much else besides. Nor is it a huge boat: it’s half a foot shorter than my current one. Nor did I have to sacrifice much to achieve this effect: various tests, in software simulation and using a physical scale model, have shown that it will be just as fast and just as stable as my current boat. It will also be reasonably cheap to build and to maintain.

To achieve these results I followed a certain recipe. I started out with the simplest, and therefore the cheapest hull shape possible: the sharpie hull. It consists of just five planar surfaces: the sides, the bottom, the deck and the transom. There are no compound curves anywhere; the deck and the transom are flat, while the bottom and the sides are curved in one direction only. The complete lack of compound curves (which produce convex or concave surfaces) makes it possible to build a sharpie hull out of plywood that is simply bent into shape, then covered with a thick enough layer of fiberglass to qualify it as a fiberglass hull.

Critically, the curve of the bottom has to match the curve of the sides, allowing the hull to glide cleanly through water without generating any turbulence, because water has no reason to cross the chines between the sides and the bottom and just streams along them. In spite of their simplicity, sharpie hulls sail well and sharpies have won races. They also have very pleasant, stiff but easy motion, and because of their flat bottoms they go aground well and can dry out at low tide without flopping on their side like keelboats do. I have spent five years living aboard and sailing around on a sharpie, and so I speak from experience, not theory. Going from a sharpie to a traditional keelboat was a huge letdown for me—a giant leap backward.

But sharpies do have a problem: they are narrow. Mine was 32 feet long but only 8 feet wide. Because of that, they are quite cramped inside, and there isn’t really room for a full-size shower stall, or a chart table that is separate from the galley table… never mind a pony! And so I changed the hull shape from a sharpie to a scow. The difference is that while sharpies have sharp bows that slice through waves, scows have bluff bows that bounce over waves. Bouncing over waves turns out to be advantageous: boats are lighter than water (which is why they don’t sink) and so pushing them through water is less efficient than allowing them to skim over it. But the most important benefit of switching to a scow hull is that the hull can be wider. For the same length (36 feet) the beam can go from 13 feet to 16 feet, adding close to a hundred square feet to both the deck and the cabin. Not only that, but it turns out that this wider beam can be carried almost all the way aft to the transom without causing any appreciable degradation in sailing performance, adding even more space.

Finally, the way most boats are designed is by separating structure from furnishings. In a sailboat all the “furniture” has to be built in, but it is usually built in in such a way that it isn’t load-bearing and doesn’t add to the structural integrity of the hull. I tossed that idea, and decided that to save money by making every single stick serve multiple purposes. Thus, furnishings are also structural, and every piece of plywood inside the boat—the bulkheads, the partitions, the settees, the bunks, the cabin soles, the counters in the galley, even the base of the sink in the heads—are structural. This approach imposed a certain amount of discipline on the interior layout, forcing it to be symmetrical.

Now, back to the pony. Many sailboat owners institute a “deck shoes only” policy, because otherwise they are forever buffing out scuff marks from their decks. Apparently, sailing is like bowling, and you are only allowed to do it while wearing funny shoes. But how do you get a pony to wear deck shoes? The solution is to surface the entire deck with aluminum diamond plate. It wears very hard, requires no maintenance, and it reflects most of the sunlight keeping the cabin cool in the summer. And so a pony can indeed be accommodated: tethered on deck to the foremast, with lots of room left over for bales of hay and buckets of manure.

But what’s really important is what’s below deck. Here is the interior layout we eventually settled on. 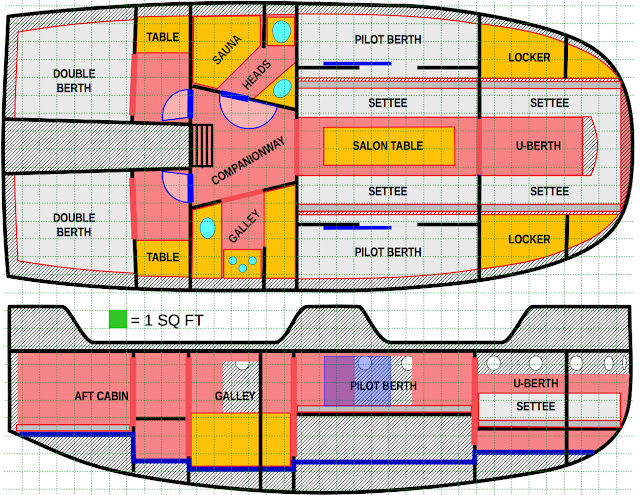 The cabin is entered via the companionway ladder, which leads down from the floor of the cockpit well. The companionway is a sort of foyer that leads in 6 directions: up into the cockpit; aft into one of the two aft cabins; to the galley to starboard; to the heads to port; forward into the salon and the U-berth beyond it. (Sailboats usually have V-berths, which are awkward wedge-shaped spaces in the bow, but since the scow has a U-shaped rather than a V-shaped bow, it’s obviously a “U-berth”).

Each of the aft cabins consists of a forward section with a table and is slightly larger than the typical library study cubicle, and a double berth aft of it which sleeps two comfortably. The galley is fairly typical and equipped with a 3-burner gas range, a sink with hot and cold water, a top-loading fridge (with a rotating, sliding lid, because hinged lids are awkward). It also has a feature that most sailboat designers neglect to add: a fume hood over the range, so that cooking smells do not permeate the boat. The heads contains the usual sink and toilet, but then also has the enclosed compartment labeled “sauna”. I indeed intend to make it into a real sauna/steam room. It will also function as a shower stall and a bathtub. It will have a seat (for what proper sauna can be without a seat) that will also function as a washbasin for hand-washing clothes (ponies may find room on board, but washers and driers definitely belong at the marina). What 36-foot sailboat can boast of having such luxurious accommodations?

Forward of the companionway is the salon, with two settees and a drop-leaf table between them, large enough to host a dinner party for twelve. To port and to starboard of the settees are the pilot berths. These are sitting height-only spaces that are quite long—long enough for two adults to sleep in them with their heads pointed in the opposite directions. A modicum of privacy is provided by a translucent sliding door. Forward of the salon is the U-berth, with two settees and ample storage space on both sides. The aft cabins and the heads have solid doors and provide full privacy while the pilot berths provide some amount of privacy. The salon and the U-berth can be made a bit more private by drawing curtains.

Although this is not immediately obvious, this layout provides a lot of storage space. There are lockers under and behind every settee. There is a lot of storage under the aft berths, accessed using a large pull-out drawer. In other places, there is additional storage under the cabin soles, accessed through lift-out hatches. Prized possessions are best stored in plastic tubs with tight-fitting lids, and there is plenty of room for these in one of the pilot berths or in the U-berth.

The result of all this is very much a boat, not a house. It will motor and sail at up to 7.5 knots, it will ride well to anchor, and it will look like a proper boat. Houses are boxes designed to be big enough to provide enough room for their inhabitants’ ever-growing pile of crap. Boats are designed to accommodate the inhabitants themselves, plus all of the essentials they need to live and a handful of extras. But this boat is designed specifically for living aboard it, with a lot of attention lavished on creature comforts. The fact that it turns out to also function quite well as a boat is an added bonus.
Posted by Dmitry Orlov at 2:33 PM