I finally found time to finish building the 1:12 model and outfitting it with sails and radio controls. Yesterday I sailed it around the marina, and I liked the results. It is fast and nimble on all points of sail, doesn’t leave a wake, and is very stiff. The shape of the bow provides for clean entry and little resistance. I didn’t notice any strange tendencies at all. Here is a video of QUIDNON sailing upwind in what for a 3-foot boat amounts to too much wind and quite a bit of chop, overcanvassed, with minimal heeling and good balance, and short-tacking successfully.


I might do a few more towing and stability tests, to verify hull speed and initial stability angle, but we already have these numbers from the hydrostatic and hydrodynamic analysis. I don’t expect any surprises, and so there probably won’t be anything to report. I am quite happy with how boring this design has been—doing everything it’s supposed to—and I am glad that the phase of playing with models is over. I am a serious person, and I find model sailboats to be silly. They are part of due diligence, but I won’t be taking them up as a hobby.

That said, the model-building process has been incredibly useful in three separate ways.

First, I had a chance to verify our technique for joining the plywood pieces using box joins and locking tabs and slots. I did find a few problems, three of them significant. We are changing the design in light of what I discovered, and will do another test at the 1:12 scale just to make sure we got it right this time before committing to a full-scale build.

One problem had to do with the curves at the bow: the plywood panels that make up the sides and the bottom as they come together to a point at the bow cannot be cold-molded and will need to be steam-bent, which is what I did.

Another problem came up while fitting the sheer strips—the long strips with the deadlights that run all around the boat just under the deck. It is not enough to secure them in place by locking them to tabs, because that produces a scalloped profile with many small gaps. Instead, they have to be pulled into place, by applying force to them at the transom. We will design jigs for steam-bending and for sheer strip-pulling.

Also, it turned out that while box joins with a rectangular toothed profile work fine for straight segments, for curved segments the teeth have to be trapezoidal rather than rectangular, with the angle of the sides of the trapezoids proportional to the angle of curvature. This turned out to be a problem when fitting the bottom to the sides.

We also had the problem of too much joinery—too many tabs and slots. Since they are free (the slots cost something in terms of the extra machine time it takes to mill them) we used a lot of them. It turns out that too much joinery is as bad as not enough, and will now work to find a happy medium, using the minimum of joinery that still allows the entire structure to be self-aligning and self-supporting.

Another major problem I was able to solve is how to eliminate virtually all finishing work on the interior of the hull. This should make construction go much faster by eliminating interior painting. The plywood panels will be treated with penetrating epoxy prior to milling parts out of them. Interior-facing surfaces will also be sanded, primed, sanded again, and painted with very durable two-part polyurethane paint, providing a surface almost as hard as a laminate. Exterior-facing surfaces will only be sealed with epoxy, to make them waterproof, since they will receive a coat of fiberglass prior to fairing and painting. The edges of the milled panels will be left unfinished, since they will be saturated with epoxy and filleted as part of the assembly process. Where the joint is exposed, it will then be dressed up with hardwood trim, while everywhere else, such as inside lockers, it will be left as is. 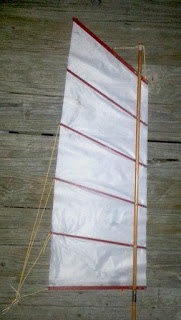 Lastly, I completely reworked the sail plan. The initial sail plan was based on Hassler & McLeod's Practical Junk Rig. They modified the original Chinese design, in which the entire sail is made up of fan-shaped panels, and replaced all but the top panels with rectangular ones, claiming that they stack more tidily and don't make much difference otherwise. After thinking about this quite a bit, I have come believe that they are wrong. In the original Chinese design, each fan-shaped panel forms a conic section, and is essentially a Lateen sail, which makes an excellent, efficient airfoil when cut as a perfectly flat piece of fabric. Lateen sails can sail very close to the wind. Keep in mind that the ability to sail to windward took a long time to make it all the way to Europe. The Chinese had this ability for centuries, using their traditional Junk sails. In other parts of the east, dhows used Lateen sails to the same effect. Only when Arab raiders started catching and looting European ships using Lateen-rigged corsairs did the Europeans look up and take note. But this wasn’t enough to make them abandon their backward square-rigged ships, which are terribly unwieldy and can barely move to windward at all.

But what Hassler and McLeod appear to have done in making the panels of the Junk sail rectangular is change their shape from a Lateen sail to square sail, and square sails are quite terrible upwind, tacking through no better than 60º. In theory, an airfoil can still be formed using the flex of the battens, but there are two problems with this: first, the battens flex more in stronger winds, which is the opposite of what’s needed, because the stronger the wind the flatter the sail needs to be; second, the battens flex asymmetrically depending on the tack, because on one tack the mast gets in the way.

To compensate, some people have recently decided to add camber, or “belly,” to rectangular sail panels. That was my original plan, which I thought was state of the art with regard to Junk sails. I was wrong; state of the art with regard to Junk sails is centuries-old. After I realized this, I designed a fan sail, which, as I have demonstrated yesterday, works remarkably well to windward. Here's my recipe. There are 5 panels, all fan-shaped, and 6 spars. Starting at the bottom, there is a boom, 4 battens and a gaff. All the panels are exactly the same in height at the luff and taller at the leach. The boom is horizontal, while each spar going up is angled 8º more than the previous spar, adding up to a 40º angle for the gaff.

At this point, we are able to declare QUIDNON’s design to be proven, in both digital and analog forms. It handles well under sail and motor, it is stable, stiff and steady, and, based on feedback from all the passers-by at the marina, it is pleasant to look at. We will now work on pushing the design to completion, since all that remains to work out is a very large number of relatively minor details.
Posted by Dmitry Orlov at 10:02 AM