[Update: I added a schematic of the hot water plumbing system and improved the description of how it will operate.]

Thanks to all the feedback I received for the previous iteration of the design, it is much improved.

The basic goals of this design are as follows:

• The stove has to be cheap and easy to fabricate as a kit out of sheet metal stock using a plasma cutter and a brake.

• It should be easy to assemble the kit using a few hand tools: wrenches, screwdrivers and a pop riveter.

• It should be able to burn either wood or charcoal.

• It should also make it possible to fit a propane burner as an option. (Some marinas do not allow solid fuel stoves.)

• It should provide heat to a cooktop, a water heater and an air heater. Each of these may or may not be in use at any given time.

• It should produce negligible amounts of radiant heat (except from the cooktop, and only when it is in use)

A lot of people commented in favor of heating a thermal mass, and this is indeed a good idea. Thermal mass heaters, such as the traditional Russian Stove, use masonry to hold heat. But masonry doesn’t have a place aboard a boat, and hiding a few bricks inside a sheet metal stove won’t make much of a difference. However, there is one substance that is better than masonry at storing heat, and it’s free. It’s seawater. It takes 4.18 J/gK to heat seawater, while soapstone—the preferred material for solid mass storage—is only 0.98 J/gK, so its more than four times worse at holding heat.

Quidnon holds 5 tons of water ballast, and the best way to store heat aboard a Quidnon is to heat the ballast water to some reasonable temperature, such as 15ºC (60ºF). Running salt water through the water heater will cause it to crust up with salt deposits that can only be removed mechanically, using a grinder. It is much better to reinject heated fresh water from hot water tanks into the fresh water bladders floating inside the ballast tanks. This would also heat the surrounding ballast water, producing the same effect.

But this was part of the plan all along. The following realizations, however, are new, and demonstrate the power of the design process we’ve been following on this blog, where experienced people contribute many excellent ideas. 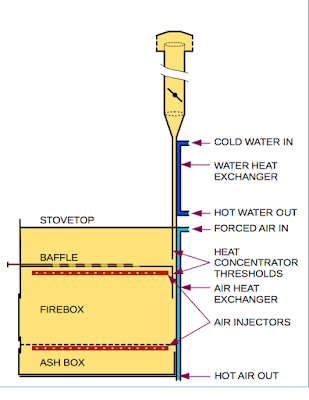 The first very important realization, thanks to Rhisiart, is that the stovetop needs to be directly above the firebox in order to produce sufficient temperatures for applications such as stir-frying and generating steam for the sauna (via sauna stones). But the stovetop doesn’t need to always be hot. When the stove is being used to heat the interior of the boat (via hot air) and/or to heat water, it should be possible to close off the stovetop using a sliding baffle.

The second very important detail, contributed by Jef, is that it is very important to be able to completely seal off the firebox from the interior airspace and to feed the fire by taking in outside air. I already knew how important this is: lighting a charcoal stove on board on a stormy night would sometimes send ash and lighter fluid fumes flying into the cabin. The trick was to catch lulls to light the flame, because once the draft was established wind gusts no longer mattered much.

This has prompted me to follow Jef’s advice and to add two air injectors. The bottom air injector is used for stoking the flame and can be driven by a small fan. Once the fire is burning, the top injector is used to produce combustion of the flammable gases emitted by the wood at just the right spot. The flow rate for the injector can be turned down, to keep a couple of hardwood logs burning all night, or turned up, to rapidly heat the stovetop and/or a lot of water.

Other parameters of the design were relatively easy to derive. A 3-inch flue is reasonable for a boat-based stove (I’ve used it successfully before). The cross-section of the flue has to remain the same both inside and above the stove. There is enough space available on Quidnon for a 16-inch-wide stove (plus a couple of inches all around for rock wool insulation and an exterior jacket made of either aluminum or stainless steel sheets pop-riveted together). Thus, the width (w) of the flue box inside the stove is 16 inches, and its depth works out to

The most common size of firewood is 16 inches long, so the firebox is 17 inches deep. It is reasonable to keep the profile of the firebox reasonably square, so it is 16 inches wide by 16 inches tall. The ash box at the bottom and the stovetop compartment at the top, above a baffle, bring the total height to around 30-32 inches.

The reason the section below the stovetop is taller than at first appears necessary is because of the threshold. Thresholds are commonly used inside stoves to keep in the hot gases, raising the combustion temperature and making for a more efficient burn. There are two thresholds: one in the firebox, and one below the stovetop. The front opening of the stove (which is fitted with a door that seats tightly against a gasket) is sized so that the top of the opening is just below the bottom of the threshold, to keep combustion gases from escaping into the cabin while loading firewood. The ash box is similarly sealed from the inside air.

There are two heat exchangers: air and water.

The simplest and cheapest heat exchanger design is one with hot flue gases on one side of a metal plate and the medium to be heated on the other. For the air heat exchanger, just as with the flue, it is important to maintain the same cross-section both outside and inside the stove, and a 3-inch duct is reasonable for piping hot air under the cabin sole and distributing it throughout the boat. This translates to the depth of the air heat exchanger also being 7/16 inches. It may at first seem strange that the cold air is pumped in at the top, since hot air rises, but this makes no difference since it then has to be forced under the cabin sole anyway.

For this, I am thinking of doing the following. 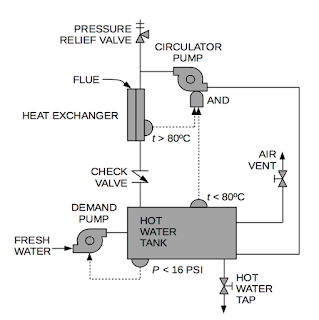 A demand pump set to 16 psi injects cold water from the fresh water tanks directly into the hot water tank until the air release valve located near the top of the tank starts spitting water and is manually closed. The air release valve is connected to a nipple located a couple of inches from the top of the hot water tank, leaving an air pocket at the top that allows it to operate as an expansion tank, absorbing excess pressure periodically generated by steam. The demand pump keeps the tank permanently near full and pressurized as water is drawn from it. So far, this is just a pressurized cold water system with a reserve tank.