Based on the positive test results from the 1:12 scale model, the design of Quidnon nouveau-retro Chinese Junk sails is almost fully baked. But there are a couple more bothersome problems to solve. Junk sails are attached to the mast using parrels, which are short lines or straps running along the battens and around the mast. This generally works rather well, but produces a couple of unintended effects:

1. The sail tends to rotate forward on the mast because the part of it that is aft of the mast is larger and therefore heavier. To counteract this tendency, Junk sails employ an additional control line called a “luff hauling parrel” which is laced through the front of the battens and then around the mast. It is yet another line to adjust, and it would be nice to get rid of it. Depending on the design of the sail, other minor control lines may be necessary as well, further complicating the handling. 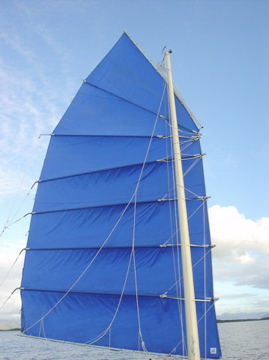 2. On one of the tacks (depending on which side of the sail the mast is) the sail drapes over the mast, distorting its shape and making it a less efficient airfoil. Without this distortion, each panel of Quidnon’s sails forms a very efficient airfoil, similar to a Lateen sail. This is an important effect when sailing hard on the wind, making one tack significantly more efficient than the other. 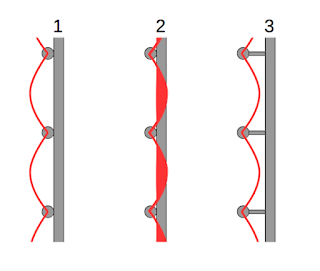 To get rid of these unintended effects, I would like to introduce a new piece of rigging: the batten standoff. These are basically sticks that fasten onto the battens at one end and onto the parrels near the mast on the other. The batten standoffs do two things: they keep the sail from sliding fore-and-aft on the mast, and they push the sail away from the mast. Under most circumstances they are self-tending and don’t require adjustment.

At their ends near the mast, the standoffs are daisy-chained on lines—batten standoff lanyards—that hang down from the end of the halyard. These lines make sure that the standoffs hang almost but not quite horizontally: they have to slope slightly toward the mast, so that they don’t ride up the mast when under compression. If the mast is to starboard of the sail, it may be necessary to walk forward and pull down the batten standoff lanyards after reefing while sailing on a port tack, when the standoffs are under compression. When they are under tension, they will be pulled into position by the battens and settle a bit further by themselves due to gravity. Thus, when reefing while on a port tack, it is best to release the sheet first, allowing the sail to luff, then release the halyard partway, then haul in and tighten the reefing line, and finally haul in the sheet to power the sail back up. 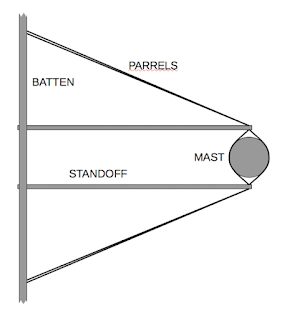 The batten standoffs have to be cheap, light, reliable and easy to jury-rig or to replace when they fail. To achieve this, I intend to make them out of aluminum pipe. The pipe is cut to length, the ends are tapped, and stainless steel threaded rod is screwed into the ends. The mast end consists of a triple clamp, with two horizontal slots for the parrels and one vertical slot for the lanyard, all tightened together using a single Nylock nut. The batten end, which goes through a hole in the batten, has a couple of washers and a Nylock. There will have to be 24 batten standoffs (6 battens × 2 sides × 2 sails) and they will cost a bit of money to fabricate (out of aluminum pipe and bar and stainless steel threaded rod, two rubber washers and two Nylocks). But I think that the improved performance and the elimination of extra control lines will make it worth it.

There is also an element of perfectionism to it. There is some amount of extra joy to be had in looking up and seeing a perfect, maximally simple, undistorted form of the sail lit up by the sun against the sky.
Posted by Dmitry Orlov at 12:24 PM