The second post on this blog, which I started almost exactly four years ago, was titled “Hull Shape” and featured the sketch shown on the left. A lot of work went into it. Concerns such as minimizing cost, maximizing ease of construction, maximizing interior living space and many others were addressed. A key feature of the design was the ability to combine the structure of the keelboard trunks with the water ballast tanks. Their position and size were based on many constraints, but the result was that water ballast alone turned out to be insufficient. Although it was more than enough to ensure stability under sail, more ballast would have to be added further aft in order for the boat to sit on its lines.

After many design iterations, the additional ballast was confined to a steel scrap-filled cement block bolted in place under the chain locker, which is, in turn, located under the cockpit. An entire sequence of steps was drawn up for dropping it out, with the boat in the water, before sweating the boat ashore using the anchor winch (to serve as a temporary beach house) and for winching and bolting it back into place with the boat once again in the water. But it was, essentially, a complication. And now, after four years of thinking through all of the various details, happily, it turns out to be unnecessary.

One of the worst mistakes one can make is to build based on an imperfect plan: build in haste, as it were, repent at leisure. Four years may seem like a long time to design just one boat. Most boat designers worry about time to market, remaining competitive, keeping the money coming in and other such issues. I am not worried in the least about any of that. I just want to design a very good boat that I am going to like, and that plenty of others will too. I am quite a few years yet away from retirement, my son is a few years yet from being able to serve as master of a ship, and so I am not going to rush. When designing something and faced with a problem, bad ideas are the first to arrive, while the good ones can take a very long time.

That said, the project is moving along. Thanks to the crowdfunding exercise of last summer, we are now running on licensed/donated CAD software (instead of lots of evaluation versions) and have a new, powerful, dedicated server box for doing renderings and running simulations. There is a list of a dozen or so to-do items, none of them huge, that have to be worked out before we can have the plans analyzed and signed off on by a marine architect, and we have the money to pay him. The questions to be answered are along the lines of “How thick should we make the fiberglass”, “What gauge steel do we use” and so on. Once past that point we will accept equity investment and start building hulls in several places around the world where people are waiting for us.

That is actually a good position to be in, making it a very good time to try very hard to resolve the few remaining unsatisfactory issues with the design. The solid ballast box is one issue. The fact that the sails are much more efficient on one tack than the other when sailing close-hauled is another. We’ll deal with that one later; today we kill the solid ballast box.

When I drew up Quidnon’s initial lines, I tried to follow Phil Bolger’s advice about square boats—that complicating their hull shapes adds more to their complexity and expense than it adds to their performance. But here is a counterexample: I believe that this change will subtract from the expense (no more solid ballast box or the mounting brackets it requires; simpler hull shape aft because the recess for the box is no longer needed) while boosting performance.

Previously, the bottom of the hull forward of amidships consisted of the bottom and two sides joined at two chines. The angle between them was 100º aft of amidships while forward from amidships it decreased until they met at a point at top and center of the bow, where the angle between them went to 0. The modification is that forward of amidships there are now four surfaces rather than three that come together to a flat spot at top and center of the bow. The bottom is now formed from two surfaces, and the centerline, called the stem, is buried a bit deeper than the two chines. This modification adds the exact amount of buoyancy forward that’s needed to make the boat sit on its lines without the fixed ballast mounted aft. 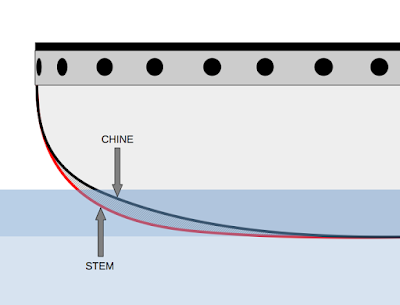 But then there are the other benefits. First, there is the improved motoring performance. When sailing on almost any point of sail Quidnon heels over a bit and presents a lopsided “V” to the water, which cuts very well through the waves. But when motoring the hull sits level and the flat surface presented to the waves at the bow slows it down. Just a small amount of deadrise at the bow (that’s the term for the “V” shape of the bottom) is enough to deflect the flow of water to the sides rather than making the boat bounce up and down while pushing an energy-wasting roll of froth with the bow (a boat with “a bone in its teeth” is Bolger’s term for that effect).

Simulations using Orca3D software showed that prior to this change to the hull shape Quidnon would actually take less power to push forward at hull speed when loaded with 10 tons of cargo then when motoring empty. This was because when empty the stern would be quicker to bog down. Getting rid of the cargo box will lighten the stern, and the added buoyancy at the bow will extend the effective waterline length, both of these changes counteracting this tendency. Moreover, when motoring along rivers and canals with the masts dropped there is no reason not to drain the water ballast, to lighten the load. Under these circumstances, having solid ballast mounted aft would be most unhelpful. When motoring without the ballast, Quidnon may be able to push its hull speed somewhat. We’ll run simulations to confirm this.

One more benefit: the slight “V” shape at the bow will not only deflect the flow of water but also of floating debris and ice chunks. Without this feature, the debris would wash directly past the prop, possibly fouling it. And as for ice, Quidnon is by no means meant to serve as an icebreaker, but it should be able to sail through many forms of ice. Sailing through ice is a big topic, and I will take it up separately later, but Quidnon’s bow turns out to be almost perfect for powering through pancake ice, slush, thin crust and other varieties of frozen water that occur in the fall and the spring. Having an “icebreaker” bow surfaced with roofing copper may allow Quidnon to extend the season a month or so in each direction.

Lastly, this change to the bow shape adds a welcome visual feature to what was previously a rather blank and featureless bow. Now, Quidnon’s hull shape is not designed to titillate—it will do enough other things that other boats can’t do to make up for its somewhat unexciting hull shape—but having a bow that looks more like a bow than like half a transom is a nod in the general direction of boating fashion that some people would I am sure welcome.
Posted by Dmitry Orlov at 3:47 AM