Although the Quidnon blog has been quiescent for the past three months, there has been some good progress on completing the design, and I can now report these results and see what comments, ideas and suggestions emerge. It takes time to come up with simple and cheap solutions to complex and potentially expensive problems.

One of the problems that is now solved is how to provide lateral resistance with minimal complexity and expense. The initial concept included chine runners, which are narrow ledges that extended horizontally from the hard chines at which the bottom joins the sides, and two centerboards that hung down from wrist pins and extended from slots in the bottom in such a way that they would kick up into their slots when encountering an underwater obstacle.

The chine runners were discarded when it turned out that Quidnon’s hull, being quite wide in order to provide relatively spacious living quarters (it is, after all, a HOUSEboat), doesn’t heel enough to allow the chine runners to bite into the water. All the chine runners did was add some drag (and, of course, complexity and expense).

The kick-up centerboards worked well enough, but there is a basic problem with them: since they hang down from a hinge, they are deflected when moving through water, and this makes for erratic steering behavior. The deflection can be minimized by adding ballast, but this makes the boards too heavy. It is also possible to add tensioner lines fed to cleats that pop open when the boards hits an obstacle, but this adds complexity.

The problems with the original centerboard design didn’t end there. How does one remove them for maintenance and cleaning, and put them back in? If this required the boat to be hauled out, then that would invalidate the very important requirement that Quidnon must never need hauling out (haulouts are expensive!). The copper cladding can be cleaned with the boat hard aground at low tide and there is nothing else down there that should ever need attention. And so a plan was created for installing and removing the centerboards with the boat in the water with the help of a diver. But divers are also expensive!

And then another good question arose: why are there two boards? Well, the initial thinking went as follows. Putting a single centerboard along the centerline wastes precious living space in the middle of the cabin by filling it with a centerboard trunk. Moving it off to the side makes the design asymmetric, and that’s functionally unimportant but aesthetically unpleasing. Therefore, let’s have two of them. The flaw in this logic is that the aesthetic consideration matters not at all because the centerboard isn’t visible. Your heart is on your left and your liver on your right, but nobody will ever call you ugly because of that.

If two centerboards are too many, how about zero centerboards? Well, it turns out that having a centerboard is rather important, but only when the boat moves. It is especially important when motoring in and out of marinas, because without the centerboard the boat will drift sideways instead of turning within a tight radius. It is also important when motoring, especially upwind. It is sometimes possible to sail downwind without the centerboard, but that’s about it. But if the boat doesn't move (as houseboats often don't) then a centerboard isn't needed at all, and having one that's quick and easy to install and remove would be a bonus.

And so just one centerboard is both necessary and sufficient. It will be located off-center (to starboard) with the centerboard trunk located unobtrusively in the back of a settee in the salon, sandwiched between it and the water tank. (But we’ll still be calling it a centerboard because offcenterboard is not a word.) The centerboard trunk forms an L-shaped slot that extends from the deck all the way to the bottom (and does extra duty as a deck drain). To one side of the slot is a channel that stops short of the bottom and tapers in a specific way before it stops. 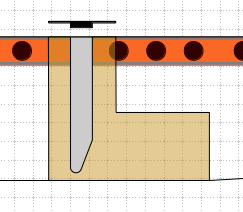 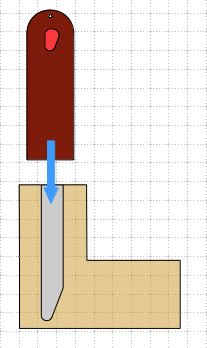 The centerboard will spend most of its life sitting flat on deck. When the boat is getting ready to move, it is installed by unceremoniously dumping it into its slot. 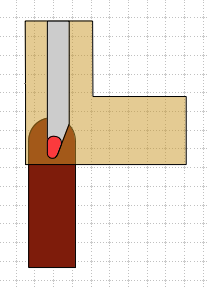 If there isn’t enough water under the boat it won’t go all the way down, but that’s usually not a problem. (You may need to give its lanyard a tug when backing out of a shallow berth, to keep it from catching on things.) 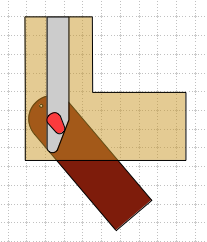 When the centerboard hits something underwater with the boat moving forward (as boats normally move) it deflects aft, but in order to do so it needs to ride up a bit, so that the cam moves up inside the tapered slot. It can stay in this semi-retracted state, bouncing along the bottom, while the boat sails or motors across shallows. This will slow the boat down a bit, but will also provide good steering because the boat will pivot around the board as it digs a shallow trench in the sand or the mud of the bottom. 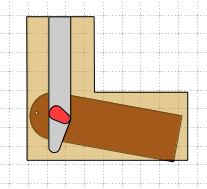 It is not necessary to remove the centerboard when anchoring above the low water line with the intention of drying out at low tide because it will be forced up entirely into its trunk.

This completes the conceptual design of the centerboard; next on the list are: the rudder; engine mount; mast steps and bow structure. These have all been reworked, and I will be detailing the new designs over the coming weeks.