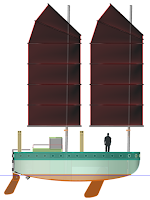 Much of the design work has been completed over the past few months. The 3D model, drafted in Rhino 3D, is largely complete. Construction techniques, including materials selection, joinery techniques and order of assembly have been largely worked out. 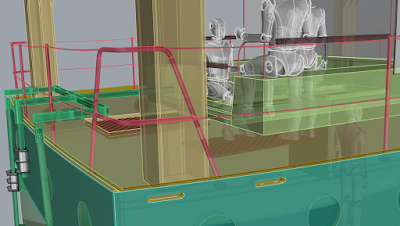 The cockpit design, the deck arches, the tiller linkage, tanks and lockers and many other details have been worked out in detail. We have designed a very strong structure for stepping the mast tabernacles, constructed out of 4x4 hardwood timbers glued and bolted together. 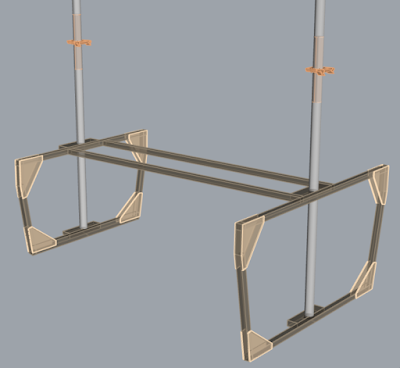 This structure, fastened and glued to the deck, bottom and sides of the hull, will also provide plenty of resistance to torsional loads, side loads when docked and strengthen the foredeck. 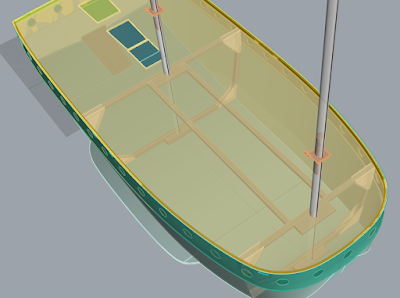 We are still working out such minor details as tiller design, hatches, interior cabinetry, wiring and plumbing, and running rigging.

The model has been hydrostatically tested using Orca3D software. (We are very grateful that Orca3D has agreed to sponsor our project, and has donated two seats of their excellent software for our use.) Hydrodynamic tests will have to wait until we build a 1:12 scale model, and conduct towing tests and other types of in-the-water testing. 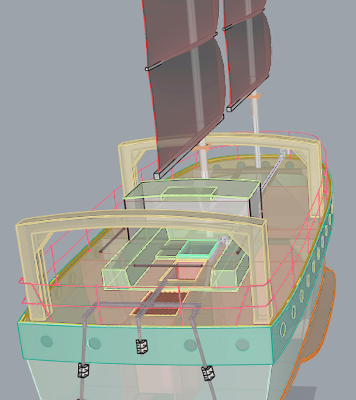 The good news is: there are no surprises at all. The hydrostatic tests have confirmed the initial calculations: QUIDNON, ballasted as initially designed, is going to be seaworthy and reasonably fast. 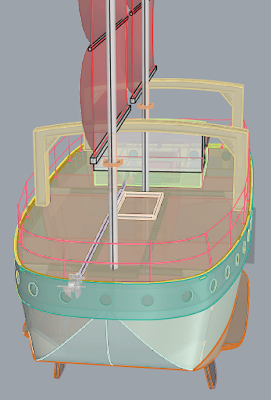 Moreover, it will be able to carry considerable freight. Here is a table of draft (with centerboards and rudder blades retracted) vs. load. 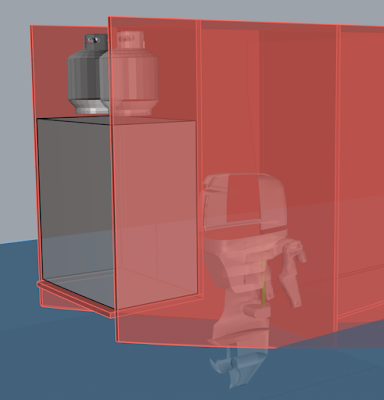 Shown above is the aft amidships section: two 20 lb. propane cylinders in an ABYC-compliant propane locker with an overboard drain, a 100-gallon gasoline tank below it, and a 40 hp outboard engine forward of it in an inboard outboard well. 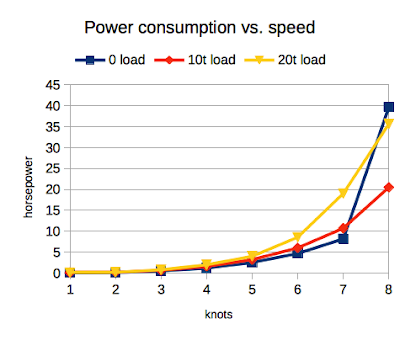 According to results from Orca3D analysis, fuel consumption and speed will be as expected. As the above chart shows, even when loaded with 20 tons of freight, QUIDNON will do a comfortable 7 knots with a 40hp outboard at half-throttle, burning 2 gallons per hour, for a 350 nm cruising range. Without freight, its cruising range increases to over 600 nm.

It is interesting to note that when QUIDNON isn't loaded, as speed increases from 7 kt, power requirement shoots up. This is because the hull form is a compromise, and at 0 load the transom bogs down faster than when loaded. But this effect will be pronounced mostly when motoring; when sailing the center of force will be further forward, keeping the bow down and presenting a smaller profile to the water.

And so it is safe to conclude that QUIDNON will work very well as a live-aboard boat. You pay for a 36-foot slip and you get around 540 square feet of interior living space, plus just as much space on deck, which is plenty of space for living aboard and for throwing dockside parties. It is fast and economical enough to make a good canal boat, and with a 20-ton cargo capacity it can be used to bring back a year’s worth of harvest from wherever you hunt, gather or grow it back to your winter quarters.

But is it seaworthy?

But, you probably still want to know, Is it seaworthy? To an engineer, this is a fairly annoying question, because there is no technical definition of seaworthiness. And so I will apply my own definition. Seaworthiness is the ability to survive arbitrary conditions at sea. By “arbitrary conditions” I mean something that includes arbitrarily high, almost vertical walls of very angry water, with spindrift blowing from the wave tops at well over 100 miles an hour.

By this standard, few boats are actually seaworthy. We can immediately rule out all catamarans and trimarans: they are more stable floating upside-down than right-side-up, and once a rogue wave flips them over, it’s game over every time.

We can also rule out most yachts, large and small, with tall masts: once the masts hit the water, more often than not they snap off, and, again, it’s game over, every time. So masts have to kept quite stubby. In QUIDNON’s case, the masts measure exactly 36 feet from the mast tabernacle hinges, because they can’t overhang the bow or the transom when the masts are dropped and secured to the deck arches (for canal work, to pass under bridges). And the reason they can’t overhang is because that would increase QUIDNON’s overall length (LOA), incurring increased slip fees at marinas, and we can’t have that.

Secondly, we can rule out all large commercial ships: tankers, cruise ships, dry bulk carriers, container ships, etc. All of them are designed for a maximum wave height, and a big enough wave will capsize them, break them in half, or both. Over a hundred ships are lost every year in just this manner. But “fixing” this problem would be too expensive, and rogue waves are rare enough to keep marine insurers in business.

But we who sail around in small boats do like them to be able to survive almost arbitrary sea conditions. And if you try to design something that is completely seaworthy, by this definition, you end up with a coconut every time. But who wants to sail around in a coconut? (Actually, QUIDNON’s hull shape comes pretty close.) 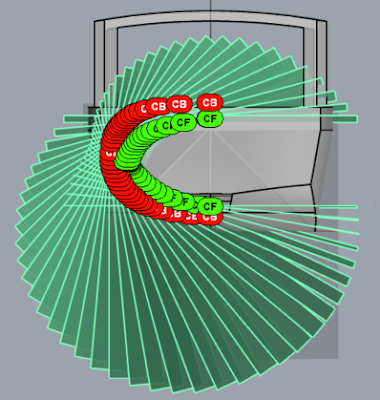 Hydrostatic analysis shows that QUIDNON is self-righting up to 130º. It is very tender when level, and just walking across the deck is enough to make it list a few degrees. But beyond 10º it puts up a very serious fight. In fact, while sailing, it is probably not possible to make it list more than about 25º, in any sort of useful wind. It continues to put up a very serious fight until about 70º. Thus, any sort of sudden squall will lay it over for a bit, but with no serious consequences (unless you fall overboard, but that's verboten).

At around 90º, it gets ready for Round Two, because at that point the masts are in the water, and they are buoyant because they are filled with foam, weighing in at negative 8.5 lb. per foot of length, with a huge lever arm. Only beyond 130º does QUIDNON develop a propensity to turn turtle and settle. 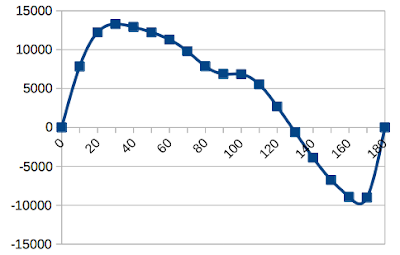 When inverted, it is only about half as stable as when it is floating right-side-up, and if it lists by more than 50º it will right itself. Thus, if a big enough wave flips it over, leaving it floating at some arbitrary angle, there is only a 27% chance that it will be left floating upside-down. And if a wave big enough to capsize it comes along, there is about a 50% chance that the following wave will be at least half as big, enough to lean it over by at least 65º, and since 65>50, QUIDNON will then right itself. And so the chance of QUIDNON remaining bottoms-up after a rogue wave event is no more than 15%. 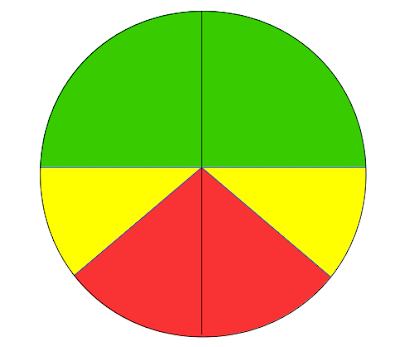 This, I would think, is quite seaworthy—for a houseboat. However, we must keep in mind that it is a houseboat, and even though we can take it out on the Big Wobbly with quite a lot of confidence, we should still remember that we are just moving house, not embarking on an extreme survivalist adventure at sea. And so, we should take certain precautions. These are divided into strategy and tactics.

The strategy is to avoid storms by carefully picking weather windows. For longer passages, on which storms are impossible to avoid completely, the strategy is to carefully pick weather windows for getting away from land, and for making landfall. The idea is to be nowhere near anything at all when bad weather hits. Rocks and shoals kill boats; wind and water—not so much. This is the sort of advice you can get from any number of books.

Another part of the strategy is preparing QUIDNON for bad weather, and it is QUIDNON-specific. QUIDNON can sail just fine with unstayed masts, but when making ready for the open ocean a bit of standing rigging makes a lot of sense. A triatic line is connected between the mast-tops, and two running stays are connected to each of the mast-tops and tensioned, the two from the foremast running forward, and the two from the mainmast running back. This set-up is traditional; Tom Colvin had lots of luck with this arrangement. Also, obviously, anything that could possibly shift in a capsize should be secured, both above and below deck.

The tactic is simply to ride out the weather, in the usual sequence: heave to, lie ahull, lie to a drogue, scud off under bare poles. Make a pot of stew, batten down the hatches and hunker down. Again, you can get this sort of advice from any number of books. Unless you are particularly unlucky, seriously bad weather generally passes in 2-3 days, and so with QUIDNON drifting at about 1 knot you’ll need about a 100 nautical mile offing from the nearest hard object to drift safely.

Since this is much more seaworthiness than one has any right to expect from a houseboat, and since it comes at very little additional expense (filling the masts with foam and rigging some running stays is pretty cheap) we will consider this aspect of the design handled.
Posted by Dmitry Orlov at 2:44 PM